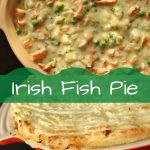 Fish Pie is a British/Irish standby featuring a creamy, smoky fish stew topped with a mashed potato crust. It's like a seaside rendition of shepherd's pie! Also called fisherman's pie by some, it's comfort in a bowl!

Fish pie is kind of a crossover dish, a bit British but also Irish. It's similar in this respect to shepherd's pie or cottage pie, for example. I figure you can call it either British or Irish depending on your mood or where you're eating it.

For the sake of argument I'm going with Irish because it's the perfect opportunity to make something other than corned beef and cabbage for St. Patrick's Day! It seems like as good an excuse as any!

Recently, I invited a friend of mine over to watch The Fall, a Northern Irish crime drama. It stars Gillian Anderson and Jamie Dornan. We are both huge Jamie Dornan fans. He was also on Once Upon a Time, and of course plays Christian Grey in the Fifty Shades of Grey movies.

He's a Northern Irish actor playing a twisted serial killer in this Northern Irish show. Making something Irish/British is apt for our marathon watching of the show. If you haven't seen this show, I highly recommend it. It's dark and twisted, but really captivating!

What is fish pie?

Fish pie is almost like shepherd's pie meets a pot pie made with fish. It's comforting, creamy, flavorful, and a pretty balanced meal. No side dish necessary, expect maybe a light, green salad for freshness.

The filling is creamy with a nice brightness from the lemon zest. It's smoky from the smoked salmon with a nice seafood flavor without being too fishy. The cod is a nice delicate fish choice especially next to the more assertive smoked salmon.

I would normally think it's crazy to put cheese anywhere near fish, but I've seen this recipe made with a mashed potato topping either with or without cheese.

I decided to take the plunge and add some nice Irish cheddar (see the Irish theme here?). It adds a sharpness and richness to the mashed potatoes. Even in conjunction with the fishy filling, it really works. It simply adds more flavor, and more flavor is never a bad thing.

Whether you create this fish pie for a St. Patrick's Day supper or for an Irish-themed television marathon starring a former Calvin Klein model nicknamed "The Golden Torso," it's bound to be a whole lot of comfort!

What are your favorite dishes for celebrating St. Patrick's Day? Have you ever tried fish pie before? 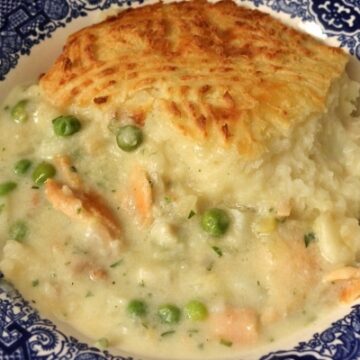