A pot pie is a glorious invention. A thick stew topped or enveloped with flaky pastry crust. It truly defines comfort, as far as I'm concerned! There are different schools of thought when pot pies are concerned. First of all, you can make one giant pot pie in a standard-sized pie dish to slice and serve. Or you can make smaller, individual-sized ones. Much like everything else in the world, I prefer the latter. Individual pot pies.

Making one giant one is just fine, but I find that slicing it up can create a very messy result in serving. It's so saucy within. I have thus only made a giant pot pie once in my life, and since then have retired to making individual pies. I've never had any complaints. I usually use oven-proof soup bowls, but this time made even smaller servings using 1-cup ramekins. These were served on Easter along with a selection of other dishes, so I found the smaller portion to be just perfect for supplementing with other foods as well, such as side dishes.

As far as the filling goes, the sky is the limit. I love a nice and chunky chicken filling, but in this case up-ed the ante and added tons of vegetables, more than usual. Generally a chicken pot pie is chicken-centric and just studded with some veggies, but in this one the vegetables shine. You not only get tons of chicken bits but a mosaic of colorful vegetables to balance it out and make you feel a tad less guilty. Carrots and celery are pretty standard, and peas are not uncommon either, but I also added frozen corn and some pearl onions. If I had mushrooms on hand, I would have added those too, definitely plan to next time. Green beans? Sure, why not! Go to town.

If you want to make this vegetarian, use veggie stock instead of chicken, and replace the shredded chicken with more veggies. Sweet potatoes or winter squash would be good, hearty options too, or even regular cubed potatoes (unpeeled red bliss!) to bulk up the filling a bit. I've made pot pies with or without potato and both ways are fantastic. Really just depends on your mood. We already had potatoes as a side dish so I definitely was not going to add them to the pot pie filling. Would have been potato overkill!

Onto the crust. Really, there are few simplicities in life more outstanding than a really good pastry crust. I thoroughly prefer pastry crust on my pot pie as opposed to puff pastry. I find that puff pastry gets mushy pretty fast, and the pastry crust is denser and holds up much better. I love this go-to recipe. It is completely neutral, containing no sugar, and one I've used in both sweet and savory applications with excellent results.

It is crazy flaky! I mean, CRAZY flaky. Don't overwork the dough, that's always the key, and keep the butter and water as cold as possible when forming the dough. This will yield more dough than needed to cover 8 ramekins, which were each about 4 inches wide, (and likely more than required for 4 oven-proof bowls, depending on the diameter of the bowls), so if you find yourself left with tons of scraps after cutting out your pot pie tops, gather 'em up, re-roll them and make a crostata for dessert! It's so easy, and a perfect post-pot pie dessert 😉 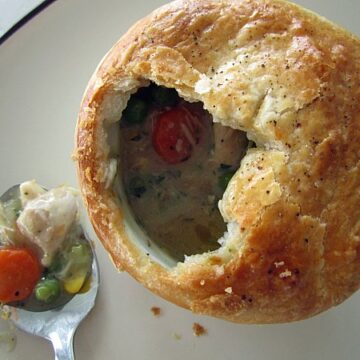 *With my leftover dough, I decided to make a small-ish apple crostata. I simply gathered the dough scraps after cutting out the circles, rerolled the dough to ⅛-inch thick, and allowed it to chill briefly in the refrigerator to firm back up a bit. Meanwhile, I peeled, quartered, cored, and thinly sliced a couple apples (1 granny smith and 1 royal gala, just to keep things interesting), and squeezed lemon juice over them. I fanned out the apple slices over the chilled dough, leaving a dough border (I only used about 1 ½ of the apples). I then sprinkled sugar over the apples, along with some ground cardamom and cinnamon, Folded over the edges, topped with leftover crumble topping, dotted the filling with unsalted butter, and brushed a bit of heavy cream on the crust. Baked it at 375°F for about 45 to 50 minutes or so until the crust was golden. What a delicious way to end the meal, and it was completely unplanned and “thrown together” last minute.