June 26, 2017 (Last Updated: April 9, 2020)
This post may contain affiliate links, which means that I may receive a commission if you make a purchase using these links. As an Amazon Associate I earn from qualifying purchases.
1shares
Jump to Recipe Print Recipe

You may or may not have noticed, but I’ve been on quite a pie kick these past few months. In April I came up with a delayed resolution to make at least one pie a month for the rest of the year (and hopefully beyond). Not only are pies delicious to eat, but making them is very therapeutic, at least for me. This resolution benefits my stomach as well as my soul.

The pie I will be sharing today is the perfect pie for the Fourth of July. No, it’s not exactly “red, white, and blue,” but it’s blue from the blueberries, maybe a little red from the skin on the nectarines, and you can make it even more patriotic as I did by forgoing the traditional top crust for some overlapping star cutouts.

Blueberries and nectarines create a killer combo for the filling in this pie. It’s heavy on the blueberries with slivers of fresh nectarine studded throughout. The not-too-sweet filling is enhanced with a bit of lemon zest, cinnamon, and vanilla extract, which add a bit of character without overpowering the fruit.

We swap out a traditional pie crust for a cornmeal crust, which simply substitutes a bit of the flour with cornmeal to offer some crunch to the flaky dough. It’s excellent, and absolutely worth pairing with the blueberry nectarine filling. I used a different cornmeal crust recipe than the one provided in the original pie recipe. I’ve made cornmeal crust previously for a maple buttermilk custard pie, and I like the way it turned out so I just stuck with that recipe instead.

Definitely aim for the baking time in the recipe, but if your pie takes longer to bake like mine did (an extra 45 minutes on top of the suggested time in the original recipe), just follow your gut and wait for the signs. If you don’t bake it long enough, your filling won’t properly set, and you’ll have a runny mess instead of thickened, decadent pie filling.

This blueberry nectarine pie is truly extraordinary! While selecting a favorite pie is much like picking a favorite child (who knows, maybe that’s easier for some folks than others), I would take the liberty of stating that this pie just might be my favorite fruit pie I’ve ever made, or at least my favorite summer fruit pie. I made it recently for guests, and everyone (and I mean EVERYONE) had seconds.

It doesn’t contain any weird or hard-to-find ingredients, it’s actually quite simple and straightforward, and yet there isn’t a single thing I would change. As I stated earlier, it’s not too sweet, so the natural flavor of the fruit shines through, and the toothy cornmeal crust is the perfect compliment for the fruits within. 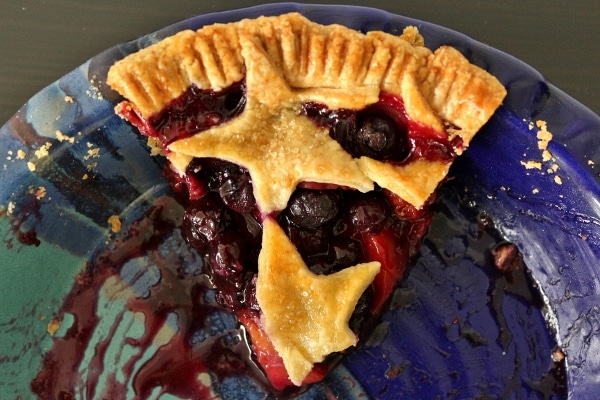 Victoria
Blueberries and nectarines are one of the best flavor combinations to ever happen to summer fruit pies. Wrap them in a cornmeal crust, and you've got a showstopper of a pie that is perfect for the 4th of July, and all summer long.
Print Recipe Pin Recipe
Prep Time 45 mins
Cook Time 1 hr
Chilling Time 2 hrs
Total Time 3 hrs 45 mins
Course Dessert
Cuisine American
Servings 1 (9 inch) pie (8 to 10 servings)
Calories 412 kcal