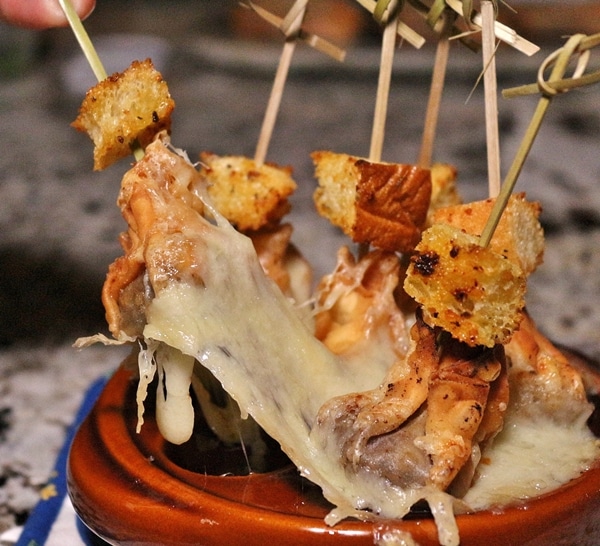 The Stanton Social was a local haunt in the Lower East Side of Manhattan for many years until it recently shuttered, hopefully temporarily until it relocates to another space. For years it was one of my favorite culinary destinations in the Big Apple. From its sinful craft cocktails to its extraordinarily original shared plates, it was THE place to be, and I have many fond and delicious memories that I hope to recreate through chef Chris Santos’ sublime cookbook Share. 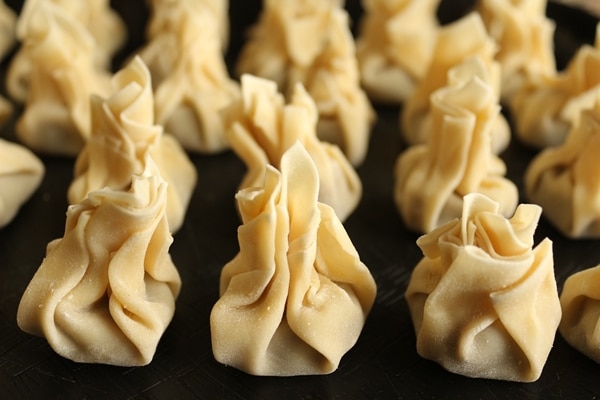 Arguably the most famous and revered dish on the menu at The Stanton Social was one of my personal favorites as well. French Onion Soup Dumplings. Let that sink in. 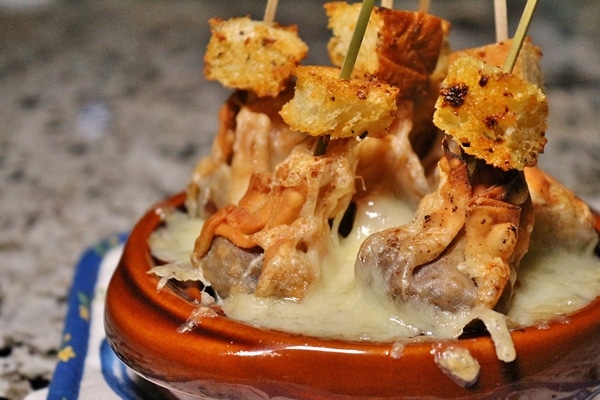 Fried wonton wrappers encase a filling of luxurious melted onions and shallots bound together with a bit of wine and broth. 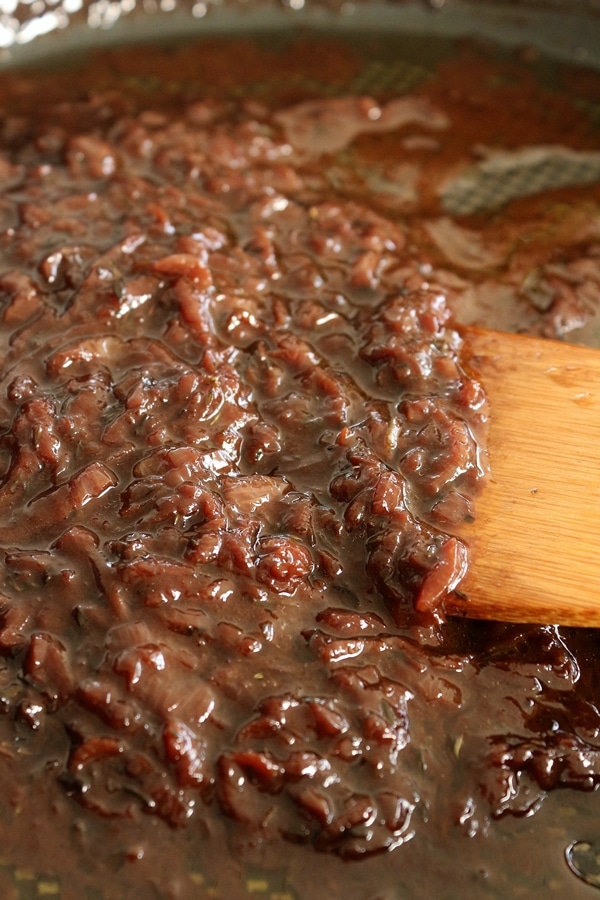 Getting the soup into the dumplings is quite simply the result of freezing and cubing the filling before assembling the little purses of dough. 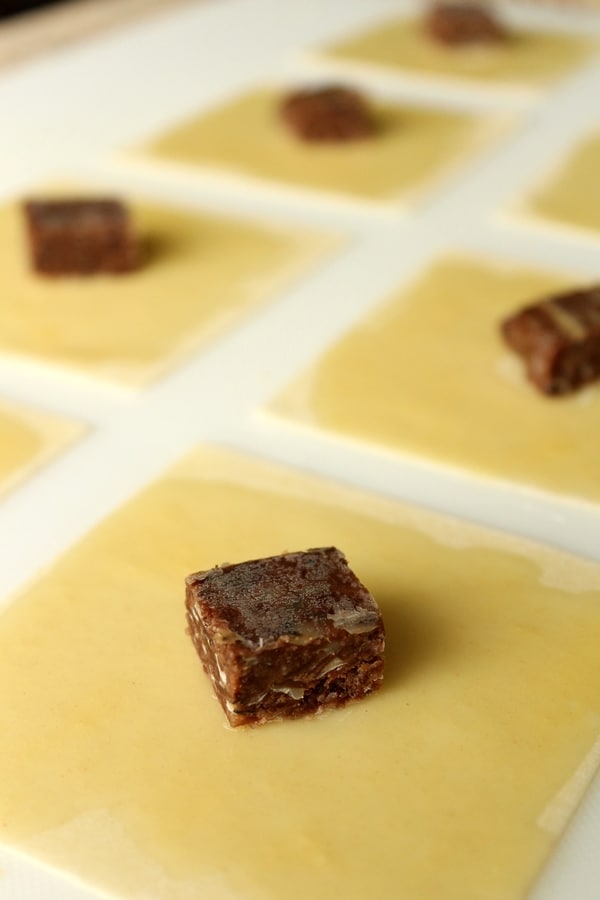 After deep frying these soup-filled bundles, they are topped with a mound of shredded Gruyère cheese and broiled. A skewered garlicky crouton is the final touch before serving these crowd-pleasing, artery-clogging bites. 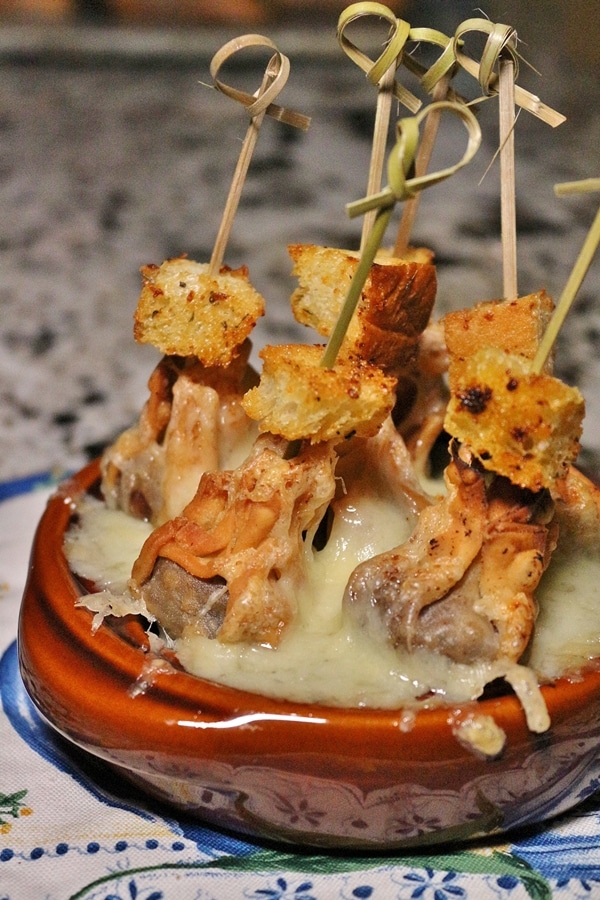 A few notes from my personal experience making these dumplings. 1) the recipe calls for too much butter. Listen, I love butter, but I found that an entire stick of butter was just way too much for the amount of onions, and my final result felt quite greasy around the edges of the pan. It was so much fat that it really felt more like I was frying the onions and shallots rather than allowing them to slowly sweat and caramelize, even with the heat on low. 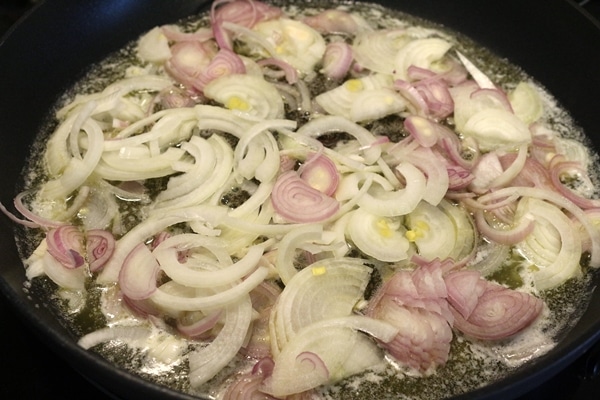 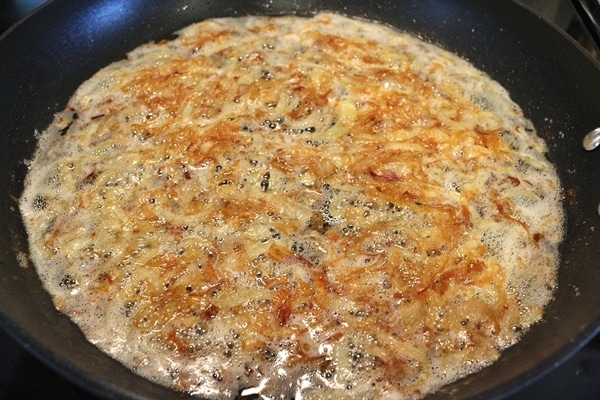 I have reduced the amount of butter in the recipe below, and even scraped off a bit of the frozen butter that solidified on top of my frozen filling to make up for the excess. 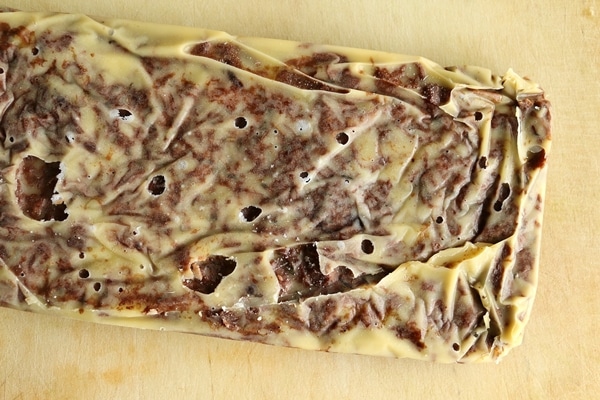 2) I also highly recommend reducing the amount of Gruyère cheese from the original recipe, which would be 1 1/2 pounds of cheese melted over 36 tiny dumplings. I shredded an entire pound of cheese, and honestly only used 8 ounces to cover all of my dumplings. I arranged 6 dumplings in an escargot dish (although the indentations weren’t really large enough for deep enough, it still managed to serve its purpose) and used a Pyrex baking dish for the remainder. 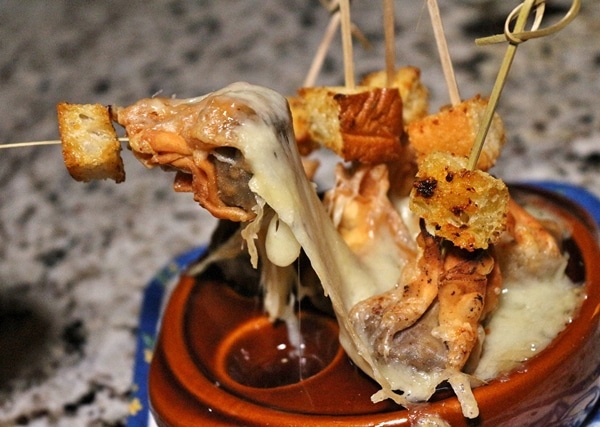 Assembly:
Vegetable oil, for frying
2 cups (8 ounces) grated Gruyère cheese (the original recipe calls for 3 times as much cheese for the 36 dumplings, and you are welcome to use that amount, but I think this was plenty)
Softened butter, for greasing

Make the filling: At least 6 hours before making the dumplings, melt the butter in a large skillet over medium-high heat. Add the onion and shallots and reduce the heat to medium. Cook, stirring often, until they are deep golden brown and very tender, about 20 to 30 minutes.

Add the wine, increase the heat to high, and cook, stirring often, until the wine has evaporated to a glaze, 5 to 7 minutes. Stir in the beef and chicken broths and bring to a boil. Cook until the liquid has evaporated by half, about 7 to 10 minutes, so the consistency is thick and mainly onion (if you over-reduce you can add a bit more broth to thin it back out). Stir in the thyme and balsamic vinegar, then season with salt and pepper. Let cool completely.

To make the croutons: Position a rack in the center of the oven and preheat to 400° F. In a medium bowl, toss all of the crouton ingredients to coat the bread thoroughly. Spread the mixture onto a large rimmed baking sheet. Bake, stirring occasionally, until the croutons are golden brown, about 15 minutes. Set aside.

To make the dumplings: Invert and unmold the frozen soup mixture onto a cutting board. Using a knife, cut the mixture lengthwise into 4 long strips, then vertically into 9 sections to make 36 cubes total. Keep the cubes frozen until ready to wrap.

Working with about 9 wonton wrappers at a time, place the wrappers on a clean work surface. Lightly brush the edges of the wrappers with the beaten egg. Place one cube in the center of a wrapper. Bring up the edges and tightly pinch them closed to create a small packet, resembling a purse. Transfer to a baking sheet. Repeat with the remaining cubes and wrappers. Cover tightly and freeze for at least 2 hours. (To freeze longer, transfer the frozen dumplings , separating the layers with waxed paper, to an airtight container, and freeze for up to 1 month.)

In a deep large saucepan or Dutch oven (or deep fryer), heat 2 inches of oil to 350°F. Place a rack over a large rimmed baking sheet to drain the fried dumplings.

Remove dumplings from the freezer. In batches, without crowding, carefully fry the dumplings in the oil until golden brown, 2 to 3 minutes. Using a wire spider or slotted spoon, carefully transfer them to the wire rack to drain. The dumplings can stand at room temperature for up to 30 minutes.

Position the broiler rack about 8 inches from the heat source and preheat on high. Lightly butter several escargot dishes or a large baking dish (or a combination of the two–I used 1 escargot dish and a baking dish for the rest of the dumplings).

Place each dumpling in its own indentation in the escargot dishes, or arrange them in rows in the baking dish. Cover the entire dish with the shredded Gruyère. Broil until the cheese is melted and golden brown, 4 to 6 minutes. Meanwhile, spear each crouton onto a skewer.

Insert a crouton-speared skewer into the top of each dumpling, being sure not to poke the bottom of the wrapper, or the dumpling will leak. Serve immediately.