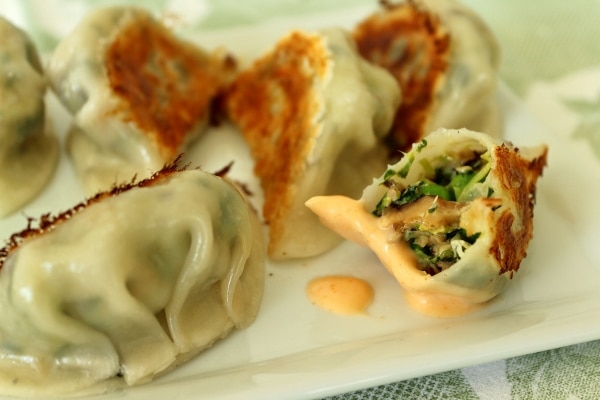 As a dumpling aficionado, I have made many varieties of dumplings over the years. I’ve used homemade wrappers as well as store-bought, and the flavor profiles have ranged from traditional to modern and creative. 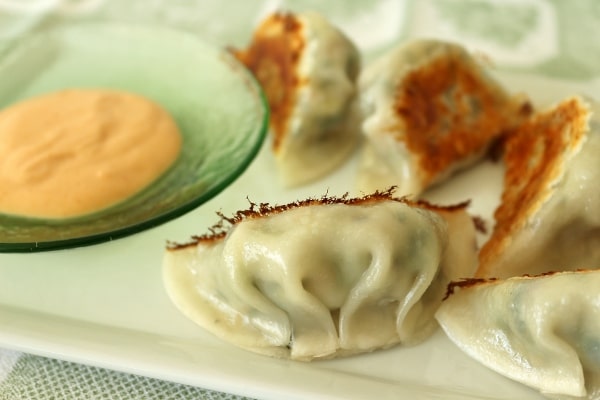 Believe it or not, my favorite dumplings over the years have something in unexpected in common: they feature vegetable-based fillings. Two of my favorites, which I’ve probably made the most of all the varieties I’ve tried include pan-fried vegetable dumplings and three-mushroom dumplings. 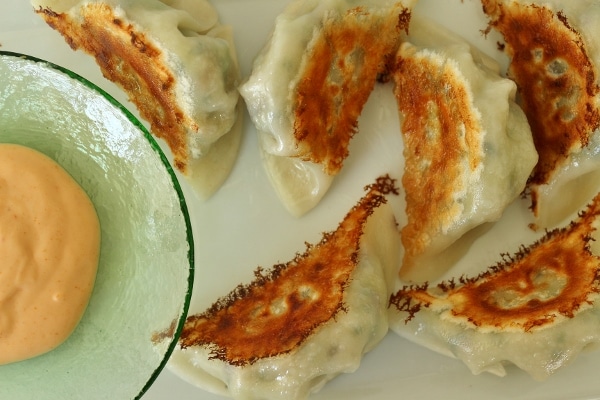 I recently tried yet another veggie filling featuring the flavors of spring: pea shoots, peas, leeks, and mushrooms. The original recipe hails from Hey There, Dumpling! I decided to approximately halve the recipe and use half a 1-pound package of dumpling wrappers, which contains 43 wrappers. 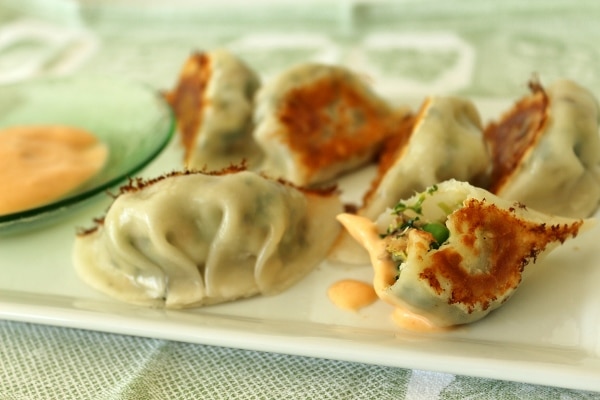 Imagine my surprise when halving the filling recipe yielded MUCH more filling than anticipated, enough to comfortably fill 35 of the 43 wrappers in the package. I’m definitely not complaining. 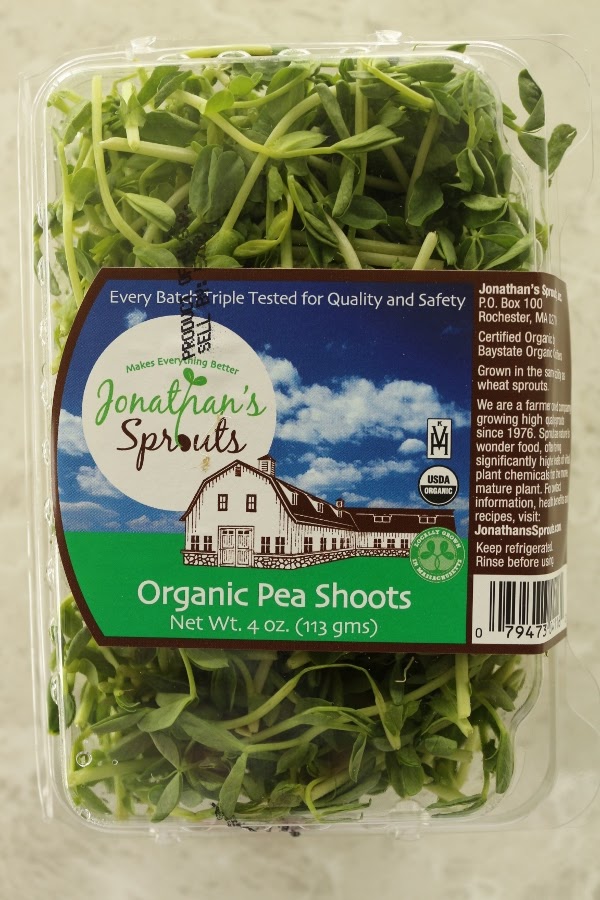 Part of the reason I reduced the recipe is because pea shoots were on the pricey side, and I wanted to make these dumplings somewhat budget-friendly, but I turned out to have enough filling for almost the whole package! 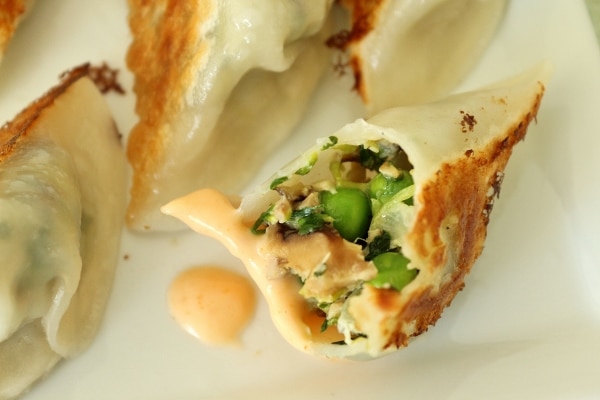 The only other change to the recipe, other than reducing all the ingredients by approximately half, is that instead of blitzing extra-firm tofu with an egg white in the food processor to include in the filling, I replaced the tofu with an equal amount of goat cheese, and omitted the egg. The goat cheese is incredibly mild, but it does help to bind the filling, and it’s a great compliment to all the other filling ingredients. 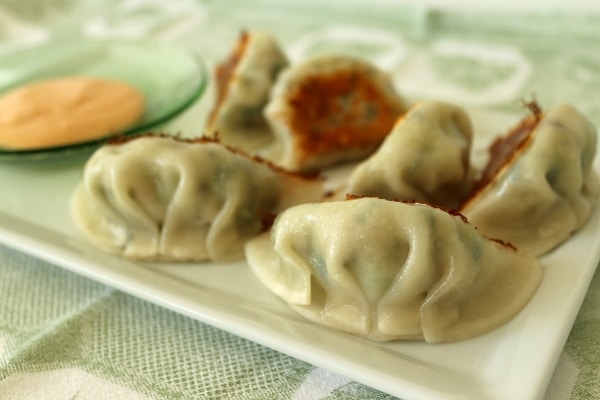 Mimi dip is the suggested sauce for these dumplings. Mimi means “secret” in Chinese. This “secret sauce” doesn’t have much to it, and yet it’s a wonderful yet unexpected compliment to these bright and vibrant spring-inspired dumplings. It’s basically a slightly watered down and mildly sweetened sriracha mayo. There, the secret is out! 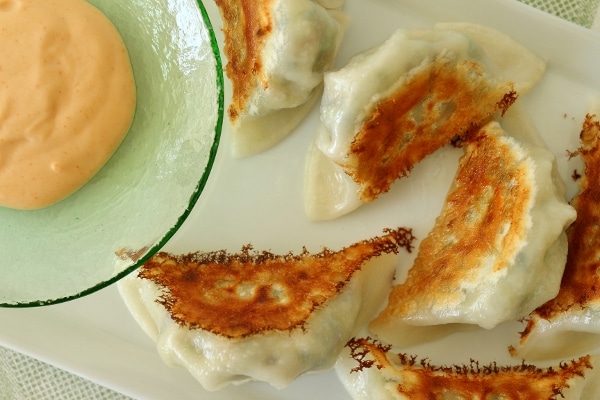 I made these dumplings recently to take to a friend’s house for International Tabletop Day (a holiday for board game-lovers). I shaped them in advance, froze them, and then took a freezer bag of dumplings to her house and cooked them there. It’s much easier to transport dumplings once they are frozen. 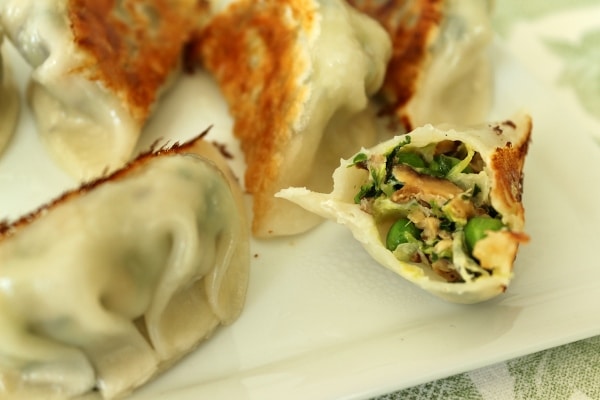 The mimi dip is also perfect for a party because it’s thick enough to spoon onto plates and not require little dipping sauce bowls, which you’d likely need if it was a thinner, soy-based sauce. Everyone at the party LOVED these dumplings, and I would definitely make them again when the season is right. 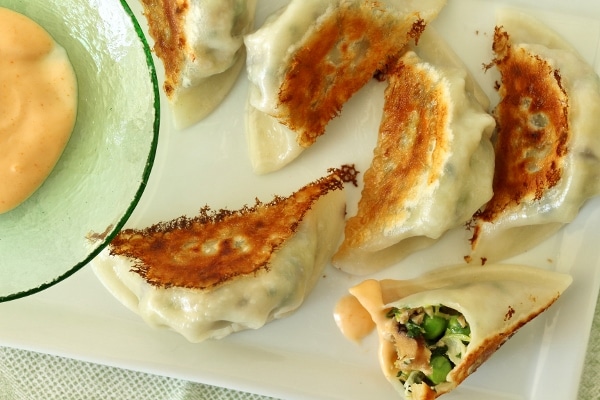 Bring a large saucepan of salted water to a boil. Fill a large bowl with ice and water. Plunge the pea shoots into the boiling water and cook until bright green and crisp-tender, about 2 minutes. Drain and immediately transfer to the ice water. Drain well and squeeze out any excess liquid.

Meanwhile, place the mushrooms in a medium heatproof bowl and cover with boiling water. Let stand until softened, about 40 minutes. Drain well, trim off and discard the stems, and squeeze out any excess liquid from the caps.

In a large skillet, heat 1 teaspoon oil over medium heat. Add the leeks, season with salt and pepper, and cook, stirring occasionally, until tender but not browned, about 5 minutes. Remove from the heat and let cool completely.

Stir the filling well with a rubber spatula until evenly mixed.

Take out five wrappers and cover the rest with a damp dowel. Lay out the five wrappers like ducks in a row. Wet 1/2 inch of the rim of each wrapper. Scoop a level tablespoon of filling into the center of each wrapper, shaping it elongated like a football to make it easier to fold. Fold the wrapper in half like a taco and pinch the edges at the top center. Continue folding the dumpling using your preferred folding method (simply press the edges together or pleat to create another shape–I used the “Buddah’s Belly” fold from the book).

At this point, the dumplings can either be cooked immediately, covered and refrigerated for up to a couple hours, or frozen.

When you’re ready to cook your dumplings, choose a large nonstick skillet with a lid. Coat the bottom of the pan with oil. Start arranging the dumplings in super-tight concentric circles. Add 3 tablespoons water to the pan (I suggest a bit more than this, especially if you are cooking a large batch at once–aim for about 1/4 inch of water), set over medium heat, and cover.

Let the dumplings cook, rotating the pan every once in a while to promote even cooking. When the bubbling sound switches to a crackle, lift the lid to peek and see if the pan is dry. This step takes about 7 minutes with fresh dumplings and about 10 minutes with frozen ones (mine took longer than this–I usually use another, more traditional method to pan-fry; you can find it here if you’re interested). You may need to continue to cook the dumplings for a few more moments to ensure they are evenly browned once the water has evaporated. (Alternatively you may steam these dumplings in a bamboo steamer basket lined with parchment paper or cabbage leaves.)

Serve the dumplings with the Mimi Dip.

Mimi Dip
Makes about 3/4 cup
(From Hey There, Dumpling!)

In a microwave-safe bowl, heat the sugar with 2 tablespoons water for 30 seconds. Stir well until the sugar dissolves. Let cool to room temperature, then stir in the mayonnaise and sriracha. The dip can be refrigerated in an airtight container for up to 3 days.

An Invitation to the Garden: Chilled Terrine of Summer Vegetables