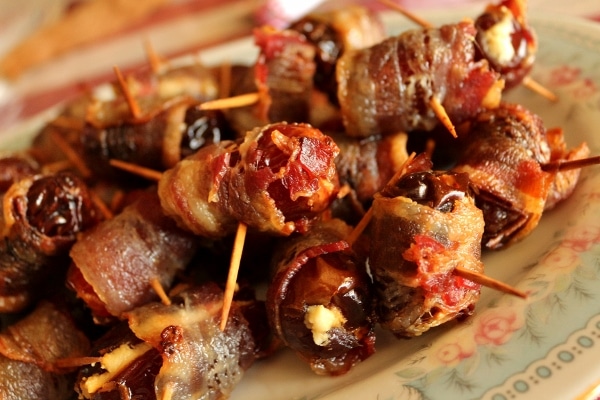 I have a tee-shirt that says “Bacon is Meat Candy.” There’s probably not other dish using bacon that really exemplifies that statement more than bacon-wrapped dates. 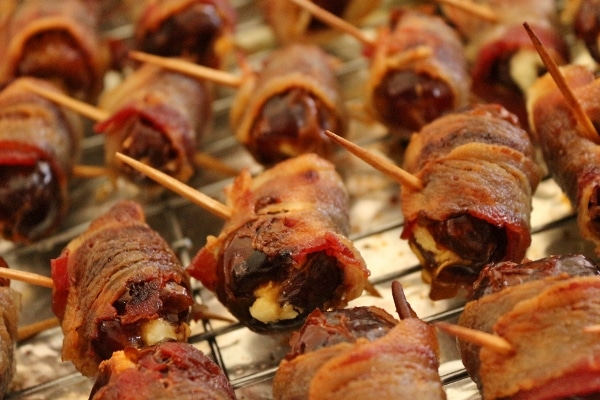 Imagine this: crispy salt bacon, wrapped around warm, sticky, sweet dates. Take that up a notch by adding a filling of tangy goat cheese. It’s the perfect trifecta. 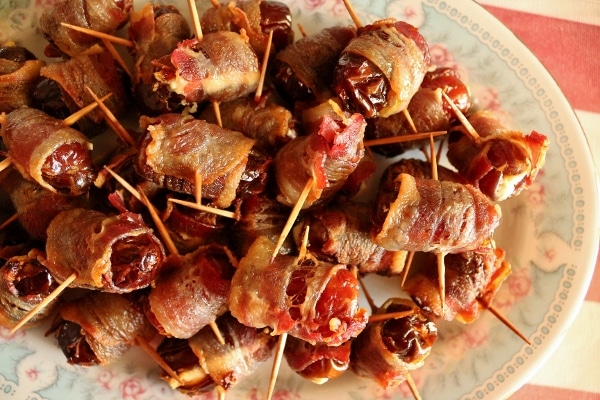 These bacon-wrapped dates stuffed with goat cheese were hugely popular at my recent Olympic party. I’ve eaten similar dates at Spanish tapas recipes, so I figure it’s fair game to represent Spain on the menu. 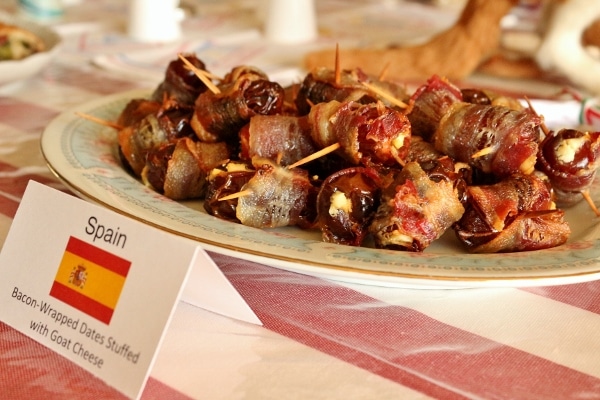 They are very easy to prepare, although it is nice to have a couple sets of hands use an assembly-line technique to make the process quicker. I’ve made these previously, simply baked in a baking pan (the higher sides help keep bacon splatter from making a mess in your oven). 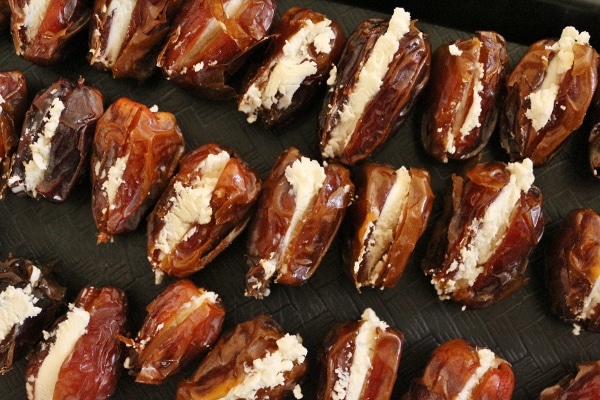 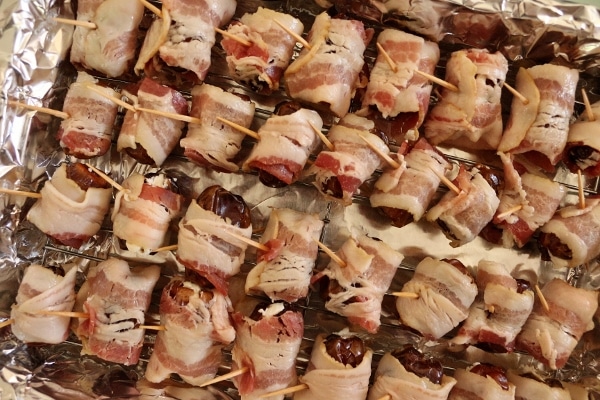 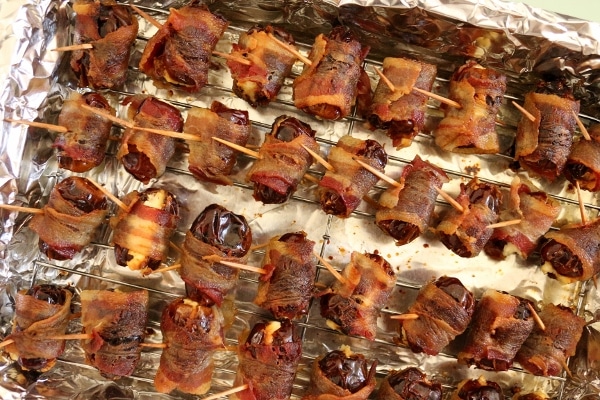 This time, I set a small wire rack in my baking pan, to let the bacon drippings fall beneath, making for a less greasy final product. 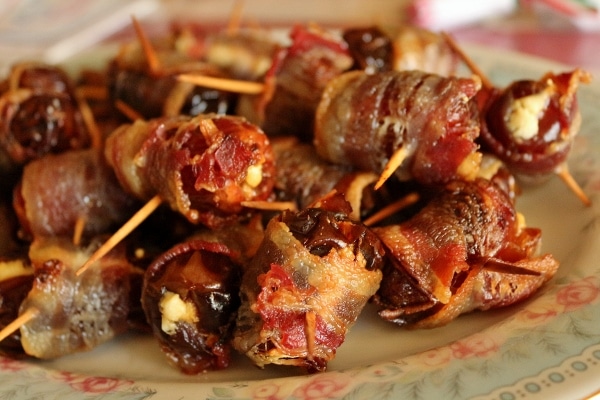 I can’t say enough about these tiny, sweet and savory morsels. They are perfect for any party. You can easily swap out the goat cheese for small slivers of Manchego, or try ricotta (I’ve done it with ricotta before and those were good as well, but definitely more mild in flavor). 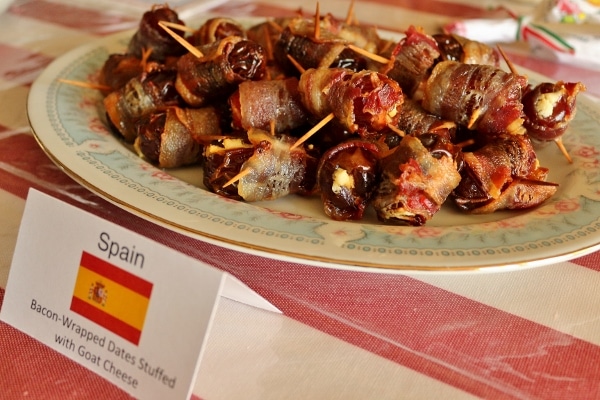 I prepped and baked these bacon-wrapped dates slightly ahead of time, and then heated them back up (in the same pan) right before guests arrived. They were just as crispy and gooey as when they first emerged from the oven, making these a good choice for a make-ahead appetizer. 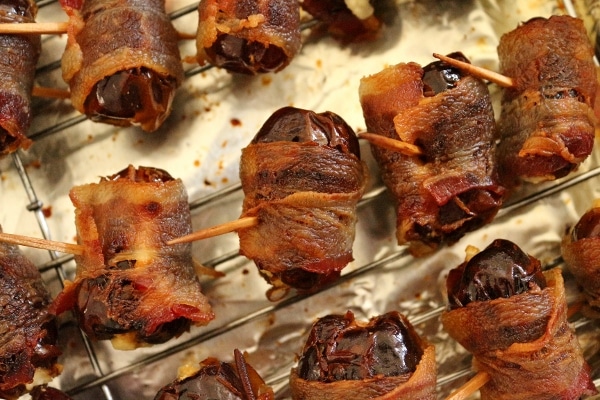 1 pound Medjool dates (about 33)
3 1/2 to 4 ounces goat cheese
About 11 slices bacon, cut crosswise into thirds (or about 16 slices cut crosswise in half if you want more bacon wrapped around each date)

Preheat oven to 375 degrees F. Line a 13-by-9-inch baking pan with foil (for easy cleanup) and place a small rack into the pan.

Using a paring knife, cut open the dates along one side and remove the pits. Fill each date with a small scoop of goat cheese, close it back up, and then wrap with a piece of bacon, using a tooth pick to skewer and secure the bacon around the date.

Arrange the bacon-wrapped dates on top of the rack within the baking pan. This will allow the bacon drippings to settle beneath, and allow the bacon to crisp up without being too greasy.

Bake for 35 to 40 minutes until browned and crisp. You may also flip the bacon-wrapped dates over partway during cooking if you’d like to allow them to brown more evenly. Remove from the oven and cool for a few minutes before serving.