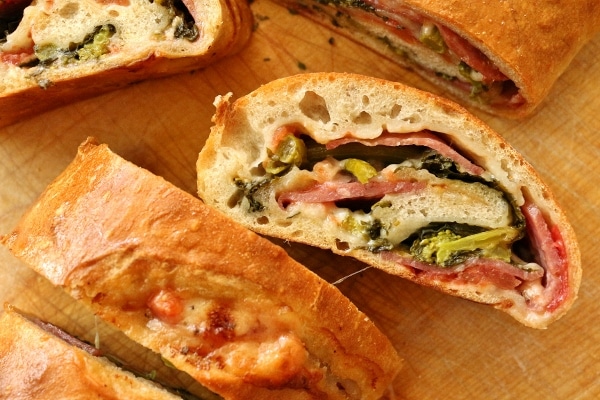 Pizza dough is incredibly versatile. It can be used for so much more than just pizza. I personally love the flavor and texture of Jim Lahey’s No-Knead Pizza Dough, although it’s a bit wetter and stickier to work with than some other pizza doughs.

While pizza in and of itself is great for a gathering, I also love using its dough to make other creations such as calzones or stromboli. Calzones are typically half-moon shaped and have one large pocket stuffed with fillings, while stromboli is more like a pizza roll and shares its name with a very active volcano off the coast of Italy. 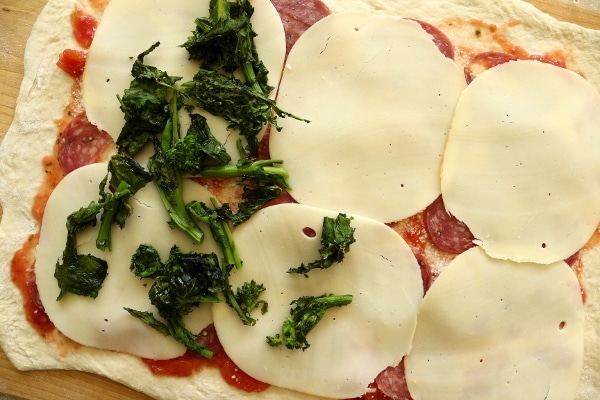 One thing in particular that I love about stromboli is that although it is great hot out of the oven, it’s often served at room temperature, which makes it perfect for a party! 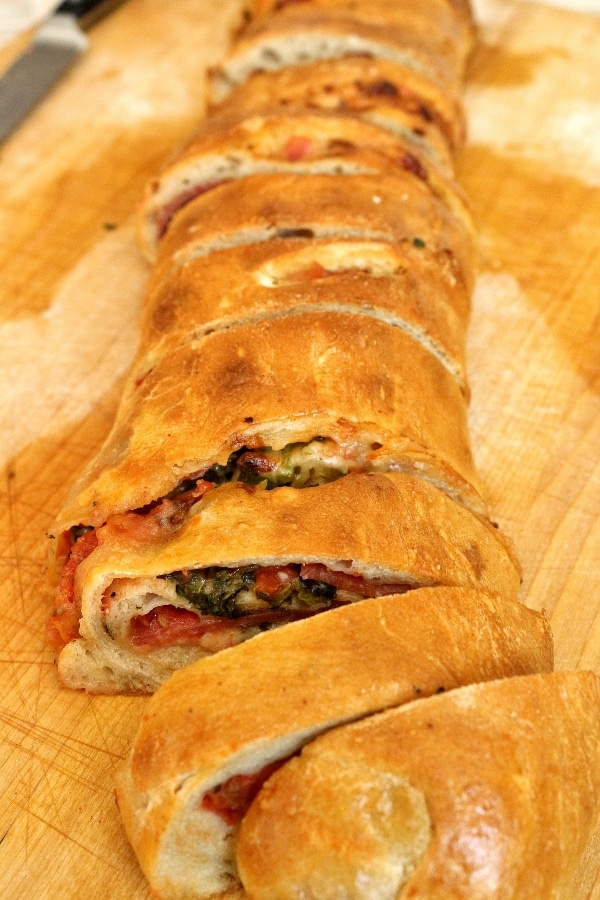 Rather than using the tired combination of pepperoni and mozzarella, I decided to try a different spin on the filling. A hand-crushed garicky San Marzano tomato sauce is the base, which is then topped with grated Parmigiano-Reggiano (or in my case Pecorino Romano). Then it’s topped with thin slices of soppressata, a type of dry salami, and Provolone cheese. The stromboli is finished off with roasted rapini, also known as broccoli rabe. 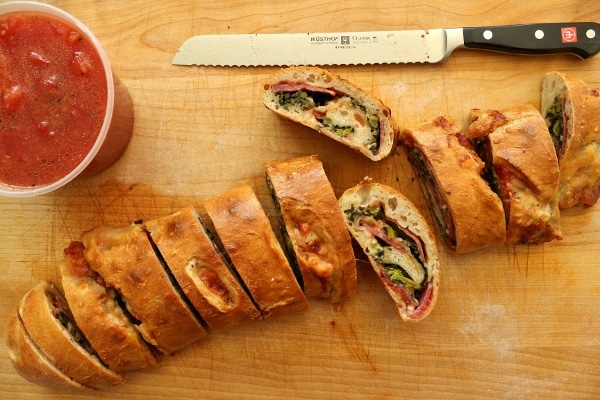 I love the saltiness of the soppressata with the slight bitterness of the rapini, all wrapped up with sharp provolone in chewy and crusty pizza dough. It’s way more refined than your pepperoni and mozzarella variation, and even adds some veggies into the mix. 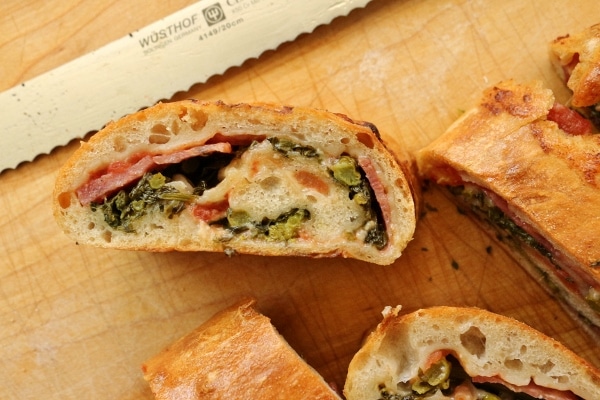 A couple notes about the recipe. First of all, you’re going to end up with a lot of extra tomato sauce. Yes, the recipe does instruct you to heat it up and serve on the side for dipping, but it’s still a lot more than you’d realistically need for this purpose. I used some of my extra sauce to make homemade frozen pizza with the rest of the pizza dough I had made, and then froze whatever wasn’t used for dipping (we didn’t dip directly into it, but spooned it from the bowl onto our plates) to make this same exact stromboli again for an upcoming occasion (*cough* Olympic party *cough*). 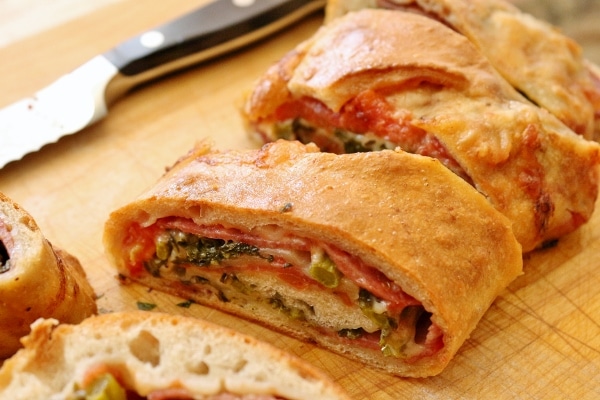 Also, my bunch of rapini was pretty substantial, and although I roasted all of it, I did not actually use it all in my stromboli filling. I used what seemed like a reasonable amount, and then saved the rest to eat as a side dish for another meal. Just use your judgement. If it looks like too much filling to actually roll it up without bursting, just scale back a tad on your rapini. 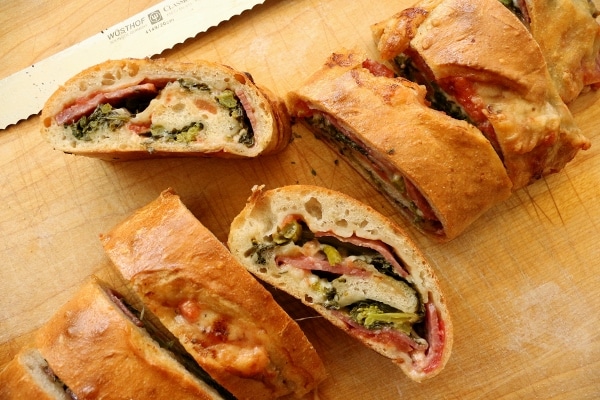 I mentioned earlier that the No-Knead Pizza Dough I typically use is on the wetter/stickier side, and although it yielded a fantastic result for my stromboli, I found that the dough was still pretty sticky after generously flouring and re-flouring the board, and it caused my stromboli to slightly tear in some places as I was rolling it up (even while using my dough scraper to lift it from the board as I went). In the future, I would be sure to flour the board even more generously, or just add a bit extra flour (or use less water) in the dough just to make it easier to work with for the purposes of rolling. 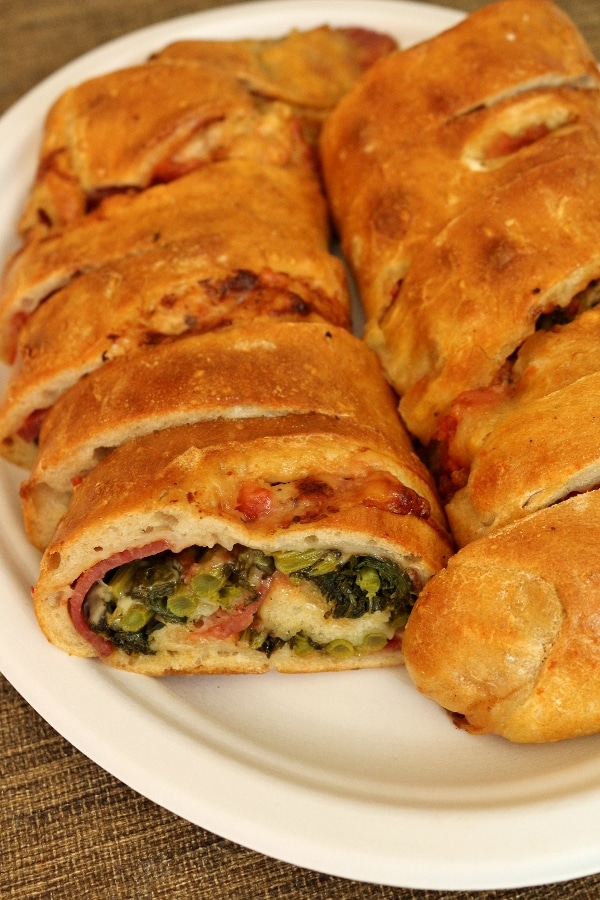 All in all, this stromboli is a huge success! It’s easy to make, and puts a more sophisticated spin on this party favorite. It can easily be enjoyed at room temperature, or gently reheated before slicing if you’d like to make it ahead of time. 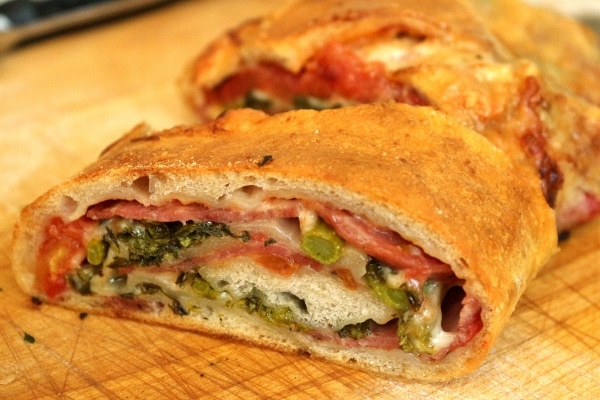 Stromboli with Soppressata, Rapini, and Provolone
Serves 6 to 8
(From Beer Bites)

Preheat the oven to 450 degrees F.

Toss the rapini with 2 tablespoons of the olive oil and a big pinch of salt in a large bowl. Spread it out on two large rimmed baking sheets and roast until the stalks are tender and the leaves are slightly charred, 8 to 10 minutes, rotating the pans in the oven halfway through.

Squish the tomatoes with your hands into a chunky sauce in a saucepan. Stir in the garlic, oregano, remaining 2 tablespoons olive oil, and 1 teaspoon salt. Set aside.

Line a clean, large rimmed baking sheet with parchment paper. Roll out the dough on a lightly floured work surface into a 16-by-12-inch rectangle with the long edges parallel to the edge of the countertop. If it is too elastic to roll out the whole way in one shot, cover it with a kitchen towel and let rest for 10 minutes, then continue rolling.

Spread 1/2 cup of the sauce over the surface of the dough, leaving a 1-inch border. Sprinkle it with the Parmigiano-Reggiano. Arrange the soppressata in an even layer over the sauce, and then layer the provolone over the soppressata. Strew the rapini over that (you may not use it all). Brush the bare edges of the dough lightly with some of the beaten egg. Beginning at the long edge closest to you, carefully roll up the dough snugly into a cylinder (like a jelly roll). Press the seam together and tuck in the ends to completely encase the filling.

Place the stromboli, seam-side down, on the prepared baking sheet. Brush the top and sides lightly with the egg. Cut five diagonal slits about 2-inches apart in the top of the dough for steam vents. Bake until the crust is a deep golden brown, 25 to 30 minutes. Let the stromboli cool for at least 10 minutes before slicing.