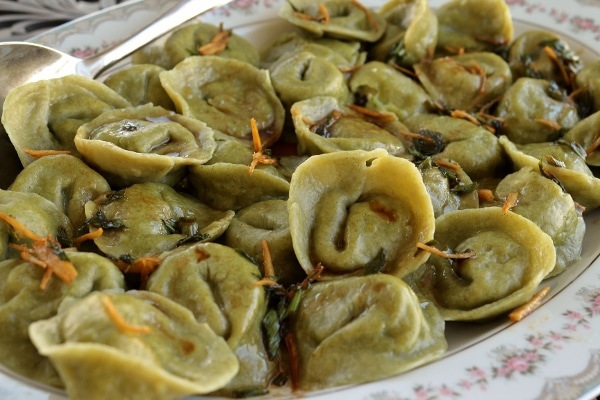 I recently celebrated my birthday with some delicious grilled cheese, as well as one of my all-time favorite treats: dim sum. 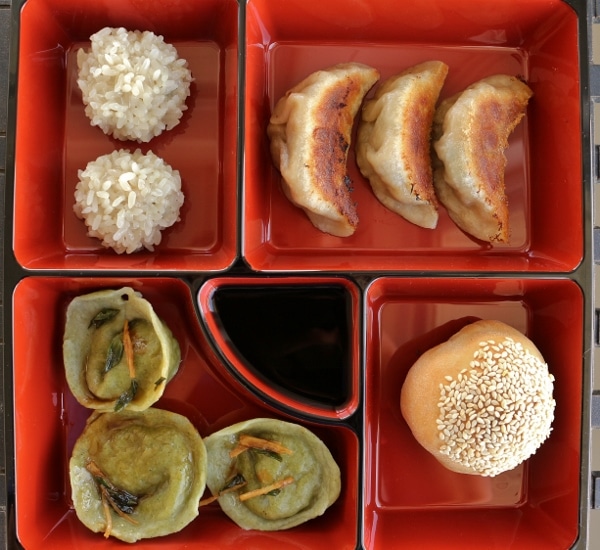 I particularly love going out to dim sum when I visit New York City, but I also love making all different kinds of dumplings at home. I occasionally use store-bought wrappers, but generally prefer to make my dumplings completely from scratch (including the dough) whenever I am able. 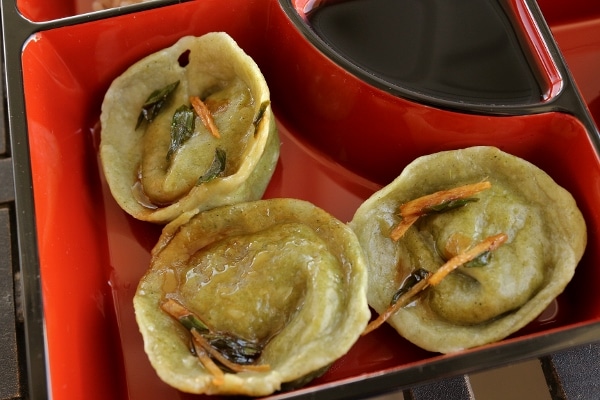 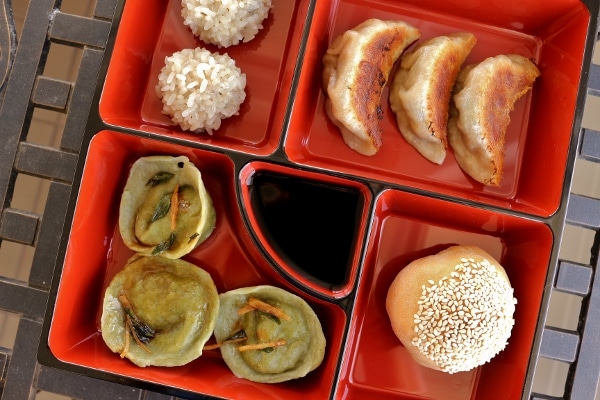 As you can see, I offered a selection of dumplings all cooked with different methods to provide some variation and give me stove-top some balance. 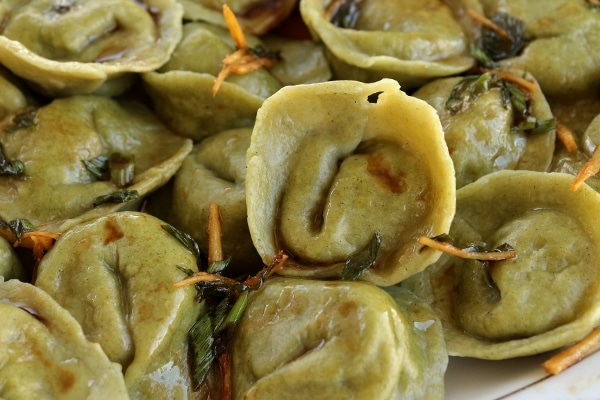 For the most part, I stuck to the fish dumpling recipe in my beloved Asian Dumplings cookbook, but I opted to finish the dumplings with a bit of added flair reminiscent of a Chinese steamed whole fish dish which is topped with julienned ginger and scallions, then drizzled with hot oil to create a nice sizzling effect, and finally a touch of soy sauce. This adaptation was inspired by the fish dumplings recipe in my very first dim sum cookbook. 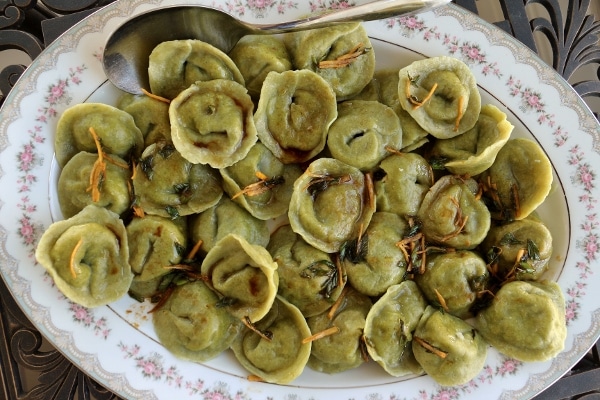 The filling is very delicate and heightened with ginger and sesame oil, among other classic Asian flavors. Because it’s so pale in color, this is the perfect opportunity to make colorful dumpling dough. Really, any color would help showcase the mostly white filling, but this green spinach-infused dough creates a classic look. 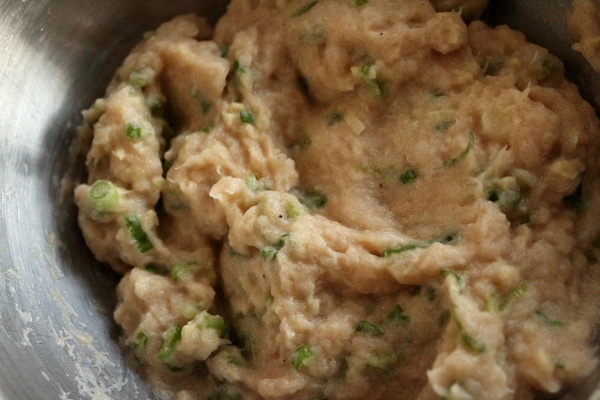 Never having eaten fish dumplings in the past, I honestly wasn’t sure what to expect. They were far better than I imagined, equally delicate in flavor and texture, with a bit of a pop from the ginger both within the filling and in the finishing “sauce.” 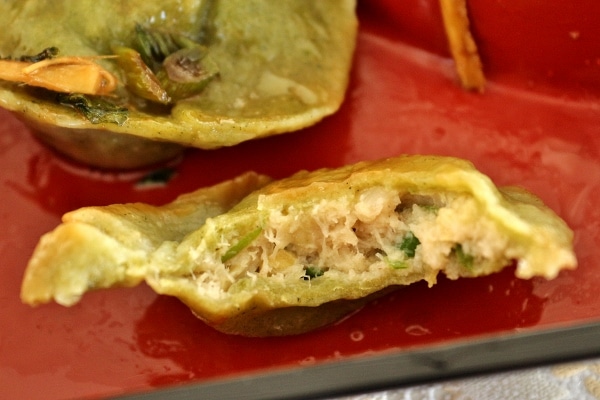 It’s easiest to boil these dumplings, although technically you may steam or pan-fry them as well. 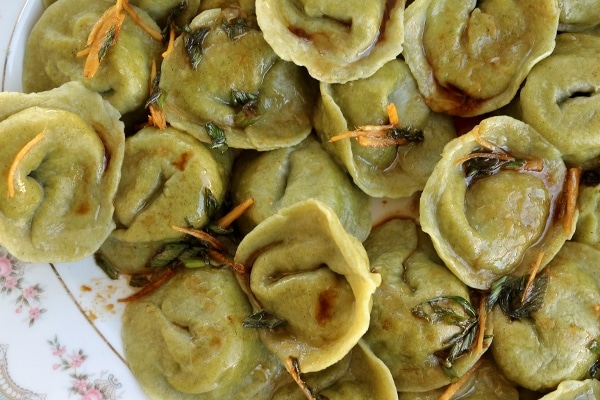 Now that I’ve finally gotten a taste of these fish dumplings, I will definitely be adding them into my circulation of dumplings to make in my kitchen. I love how they contrast so many of the other traditional ones I typically make, such as pork and cabbage, pork and chive, and of course any number of the vegetable based fillings. 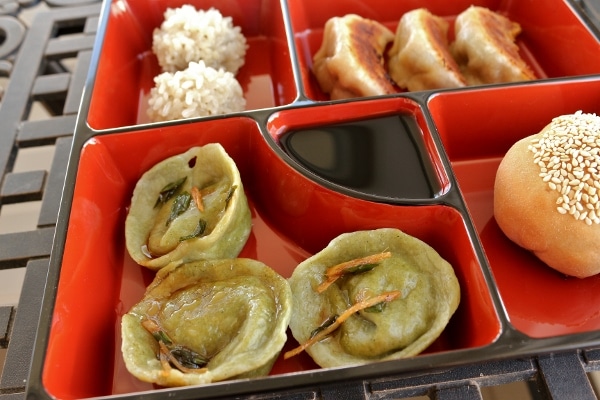 To make the filling, cut the fish into 1-inch chunks, discarding any bones you discover along the way (bevel-tipped tweezers will help, if you have them). Put the fish in a food processor.

In a small bowl, combine the salt, white pepper, chicken stock, soy sauce, wine, canola oil, and sesame oil. Mix well to create a seasoning liquid, and then pour about 2 tablespoons of the liquid into the food processor. Run the food processor, pouring the remaining seasoning liquid through the feed tube. Grind to a coarse paste, stopping occasionally to scrape down the sides.

Return the paste to the bowl and mix in the ginger and Chinese chives. To develop the flavors, cover with plastic wrap and set aside at room temperature for 30 minutes. You should have about 2 cups of filling. (The filling can be prepared 1 day ahead and refrigerated. Return it to room temperature for dumpling assembly.)

To make the dough: place a large mixing bowl over a damp paper towel on your work surface, to keep in place while mixing. Add the flour and make a well.

Liquefy spinach and water in a blender for about 90 seconds, or until there is an intensely green, smooth mixture. If needed, pause the blender to scrape down the sides. Transfer to a small saucepan and heat over medium heat. When the spinach comes to a near boil (look for foam all around the rim), turn off the heat. Stir to blend in the foam, measure out 3/4 cup. Use a wooden spoon to mix the flour while you add the spinach water in a steady stream. Mix together until you have a lot of lumpy bits, then knead the hot dough in the bowl until the dough comes together. Add spinach water by the teaspoon if the dough does not come together.

Before assembling the dumplings, line a baking sheet with parchment paper. (If you plan to refrigerate the dumplings for several hours, or freeze them, lightly dust the paper with flour to avoid sticking.) For each dumpling, hold a wrapper in a slightly cupped hand. Scoop up about 1 tablespoon of filling with a bamboo dumpling spatula, dinner knife, or fork and position it slightly off-center toward the upper half of the wrapper, pressing and shaping it into a flat mound and keeping about 1/2 to 3/4 inch of wrapper clear on all sides. Fold, pleat, and press to enclose the filling (I made mine into tortellini style shapes). Place the finished dumpling on the prepared baking sheet. Repeat with the other wrappers, spacing the finished dumplings a good 1/2 inch apart on the baking sheet. Keep the finished dumplings covered with a dry kitchen towel as you form wrappers from the remaining dough and fill them with the remaining filling (I yielded some extra filling–this always seems to happen with recipes from this book–but I froze it and plan to make another half batch of dough to finish it up in the near future).

Once assembled, the dumplings can be covered with plastic wrap and refrigerated for several hours; they can be cooked straight from the refrigerator. For longer storage, freeze them on their baking sheet until hard (about 1 hour), transfer them to a zip-top freezer bag, seal well, and keep them frozen for up to 1 month; partially thaw, using your finger to smooth over any cracks that may have formed during freezing, before cooking.

To cook the dumplings, half-fill a large pot with water and bring to a boil over high heat. Add half the dumplings, gently dropping each one into the water. Nudge the dumplings apart with a wooden spoon to keep them from sticking together and/or to the bottom of the pot. Return the water to a simmer and then lower the heat to maintain the simmer and gently cook: a hard boil can make a dumpling burst. Cook the dumplings for about 8 minutes, or until they float to the surface, look glossy, and are puffed up and a tad translucent. Use a slotted spoon or skimmer to scoop up the dumplings from the pot, a few at a time, pausing the spoon’s motion over the pot to allow excess water to drip back down before putting the dumplings on a serving plate. Cover the plate with a large inverted bowl to keep the dumplings warm. Return the water to a boil and cook the remaining dumplings. When done, return the first batch to the hot water to reheat for a minute or two. There is no need to reboil (my pot was large enough to gently boil all the dumplings in one batch, but please use your judgement).

Meanwhile, heat a small skillet, and then add the oil. When it is almost smoking, add the ginger and scallion and stir-fry for 1 minute. Remove from the heat and stir in the soy sauce. Drizzle the mixture over the finished dumplings. Serve hot.