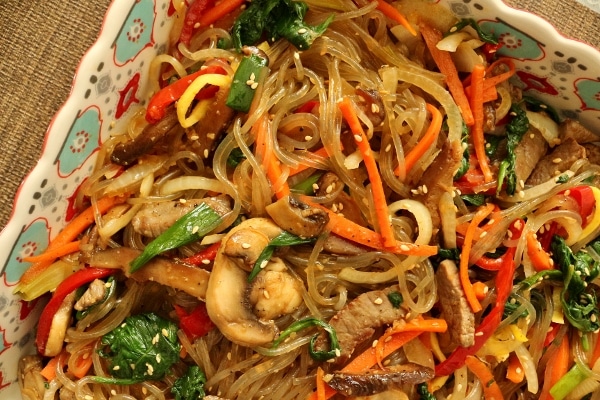 Japchae is a traditional Korean dish made with stir-fried sweet potato noodles, meat, and vegetables. This lovely, colorful creation may be heavy on the veggies, but it’s not exactly healthy–there’s quite a bit of sesame oil in it as well as vegetable oil for cooking. 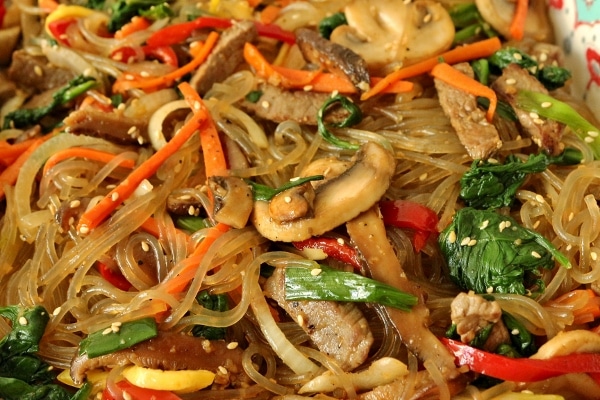 Korean sweet potato noodles, or dangmyeon, are gluten-free and made of only sweet potato starch and water. They are a grayish color until they’re cooked, and then become chewy and crystal clear (they’re sometimes called glass noodles). 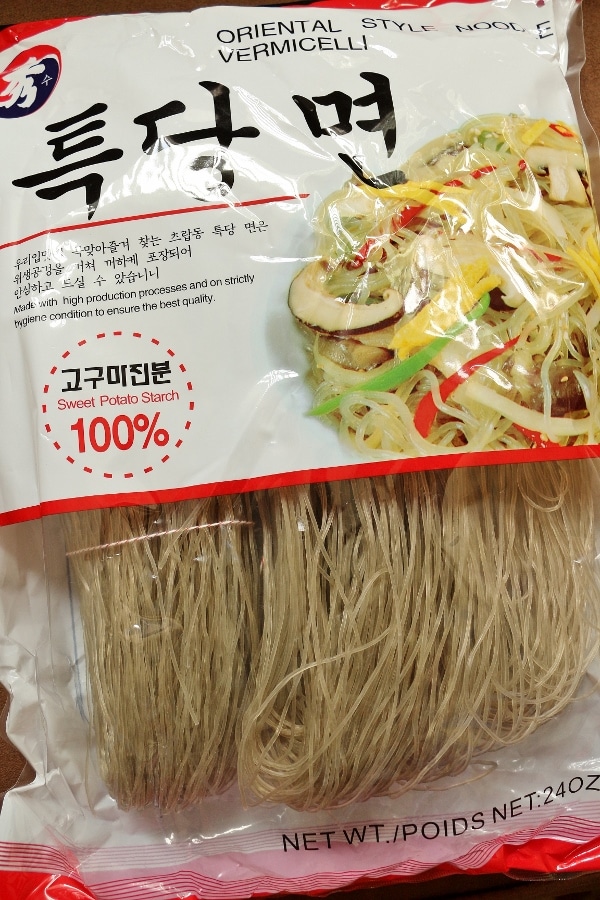 When mixed together with the meat, vegetables, and seasonings, they become shiny and slightly sweet with a pretty intense sesame flavor from the sesame oil and toasted sesame seeds. 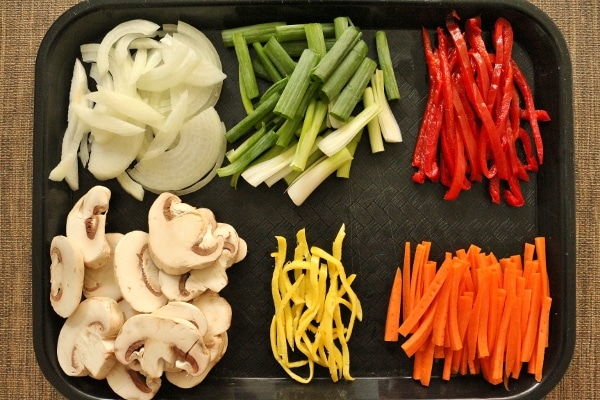 Even though it’s a bit tedious, cooking each vegetable separately is fundamental to this dish. Each ingredient has a different cooking time, and by cooking them individually, each one maintains its integrity, both in color and texture to make a beautiful and cohesive dish. 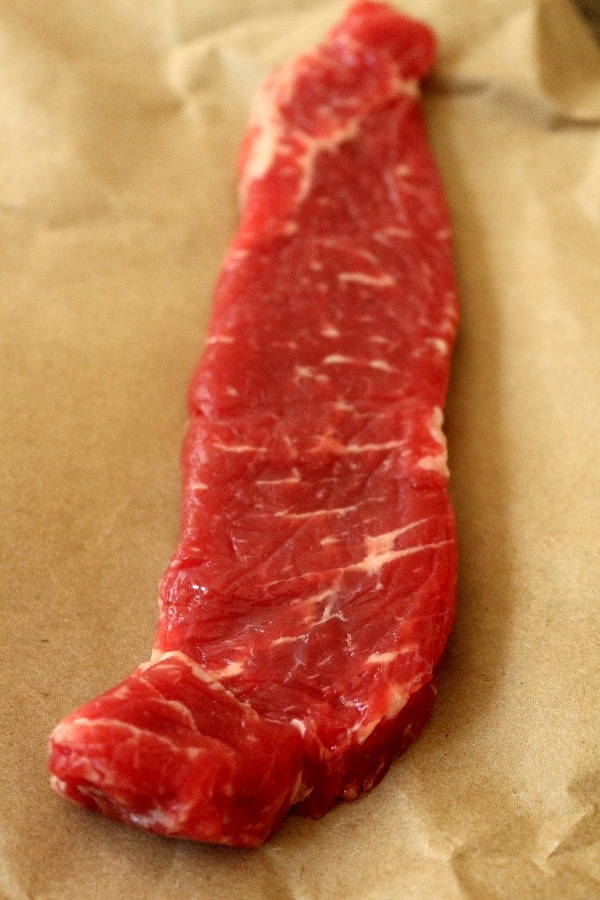 You can use several tender cuts of beef or even pork to add protein to the dish. I was able to get a small 4-ounce piece of grass fed non-GMO striploin (aka strip steak) on sale from Whole Foods.

The butcher was nice enough to cut me a smaller slice than what they had on display, and even trimmed the fat off for me. Even though you’re only using a tiny bit of meat in the dish, using the good stuff does make a difference.

If you’d like to make this dish vegetarian, omit the meat and use a few more re-hydrated dried shiitake mushrooms in its place. 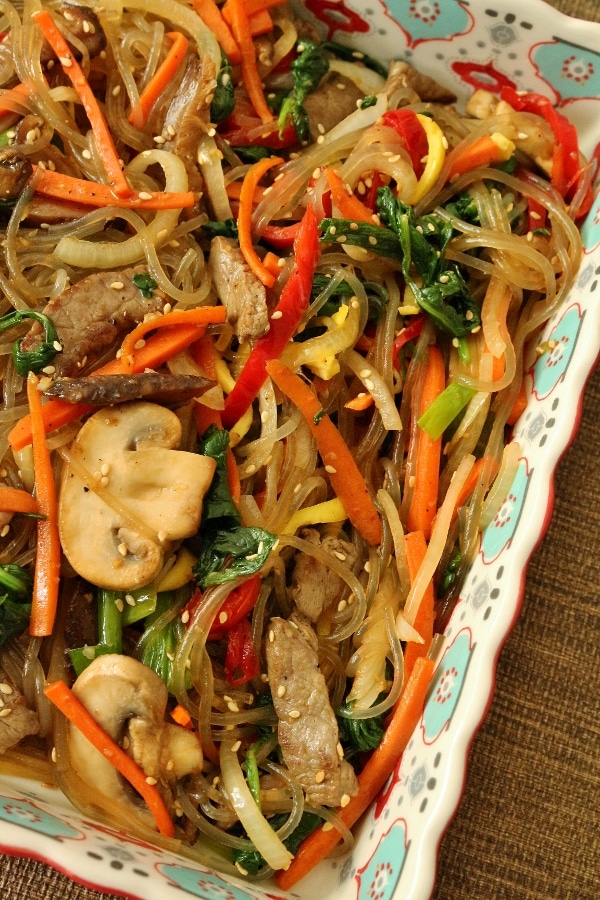 To marinate the beef and mushrooms: Put the beef and shiitake mushrooms into a bowl and mix with 1 clove of minced garlic, 1 teaspoon sugar, 1/4 teaspoon ground black pepper, 2 teaspoons soy sauce, and 1 teaspoon of sesame oil with a wooden spoon or by hand. Cover and keep it in the fridge.

To make the egg garnish (jidan): In a small bowl, beat the egg yolk and a pinch of salt with a fork.

Add 1 teaspoon of vegetable oil to a heated nonstick pan. Swirl the oil around so it covers the pan, and then wipe off the excess heated oil with a paper towel so only a thin layer remains on the pan.

To keep the jidan as yellow as possible, turn off the heat and pour the egg yolk mixture into the pan. Tilt it around so the mixture spreads thinly. Let it cook using the remaining heat in the pan for about 1 minute. Flip it over and let it sit on the pan for 1 more minute. Let it cool and slice it into thin strips.

To prepare the noodles and vegetables: Bring a large pot of water to a boil. Add the spinach and blanch for 30 seconds to 1 minute, then take it out with a slotted spoon or strainer. Let the water keep boiling to cook the noodles. Rinse the spinach in cold water to stop it from cooking. Squeeze it with your hands to remove any excess water. Cut it a few times and put it into a bowl (no need to cut the spinach if you’re using baby spinach). Mix with 1 teaspoon soy sauce and 1 teaspoon sesame oil. Put it into a large mixing bowl.

Add the noodles to the boiling water, cover and cook for 1 minute. Stir them with a wooden spoon so they don’t stick together. Cover and keep cooking for another 7 minutes until the noodles are soft and chewy.

Strain and cut them a few times with kitchen scissors. Put the noodles into the large bowl next to the spinach. Add 2 teaspoons sesame oil, 1 teaspoon soy sauce, and 1 teaspoon sugar. Mix well by hand or a wooden spoon. This process will season the noodles and also keep the noodles from sticking to each other.

Heat up a skillet over medium high heat. Add 2 teaspoons vegetable oil with the onion, the green onion, and a pinch of salt. Stir-fry about 2 minutes until the onion looks a little translucent. Transfer to the noodle bowl.

Heat up the skillet again and add 2 teaspoons vegetable oil. Add the white mushrooms and a pinch of salt. Stir-fry for 2 minutes until softened and a little juicy. Transfer to the noodle bowl.

Heat up the skillet and add 2 teaspoons vegetable oil. Add the beef and mushroom mixture and stir fry for a few minutes until the beef is no longer pink and the mushrooms are softened and shiny. Transfer to the noodle bowl.

Add 1 minced garlic clove, 1 tablespoon soy sauce, 1 tablespoon sugar, 1/2 teaspoon ground black pepper, and 2 teaspoons of sesame oil to the mixing bowl full of ingredients. Mix all together by hand. Add the egg garnish and 1 tablespoon sesame seeds. Mix it and transfer it to a large plate to serve. 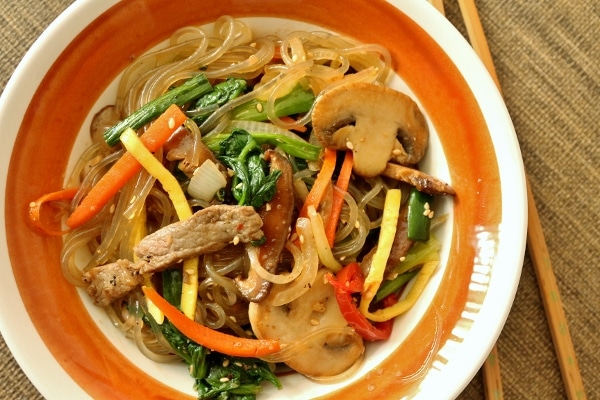