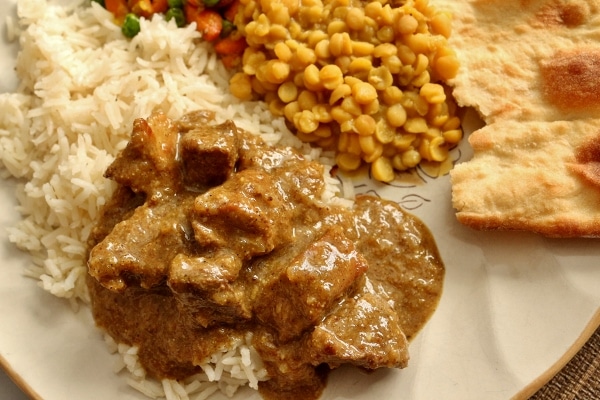 Vindaloo is an Indian curry dish deriving from the Goa region of India, with a Portuguese influence. It is notoriously spicy with an acidic/sour element developed from the use of vinegar. 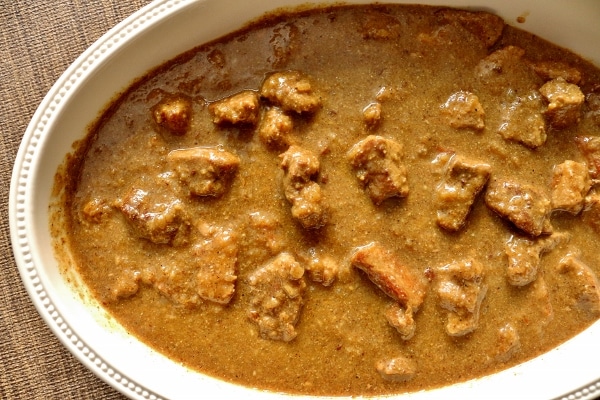 It often includes cubed potatoes, but that is not necessarily authentic. It’s typically made with pork, but can also utilize lamb, beef, or even chicken. Use the same basic technique with whichever protein you prefer. 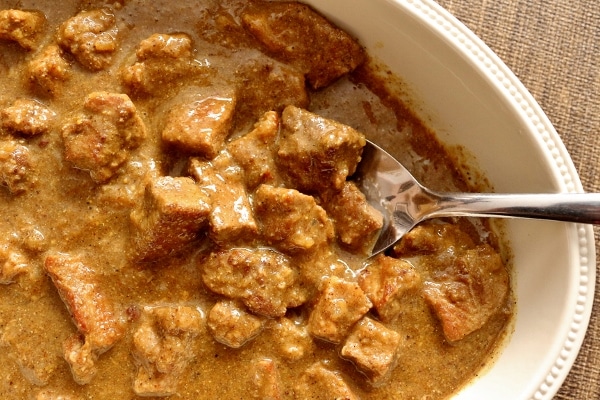 Vindaloo is one of my sister’s favorite curry dishes. She has ordered it so many times in Indian restaurants over the years that she has acquired the nickname Vinda-Lucy! I figured there was nothing more apt to make for her recent birthday dinner than a homemade Indian feast featuring Pork Vindaloo, Chana Dal, Gajar Matar, Naan, and Basmati Rice. 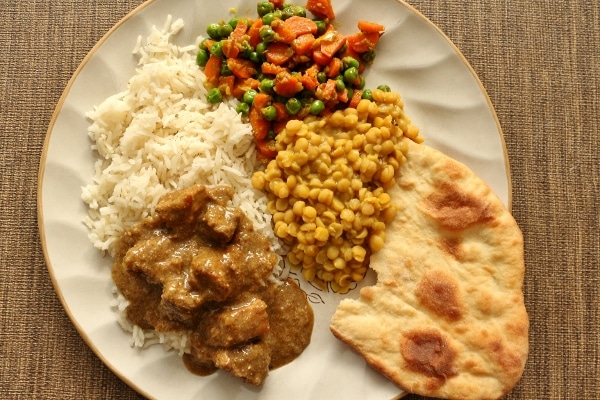 I didn’t want the vindaloo to be overwhelmingly spicy since certain members of my family can only tolerate limited spice. I used two small dried Indian red chilies, and found this to be a very comfortable level of spice. 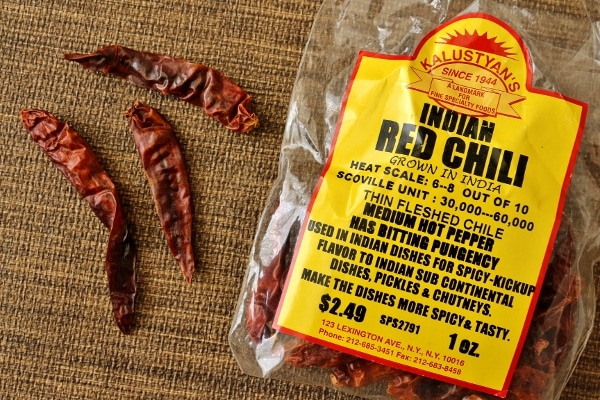 When tasted on its own, there is definite heat in the curry, but when served over rice, it’s a lot easier to handle (although it’s by no means mild). My entire family was satisfied by the amount of spice, but if you want to breathe fire, by all means add more chilies. I won’t stop you! 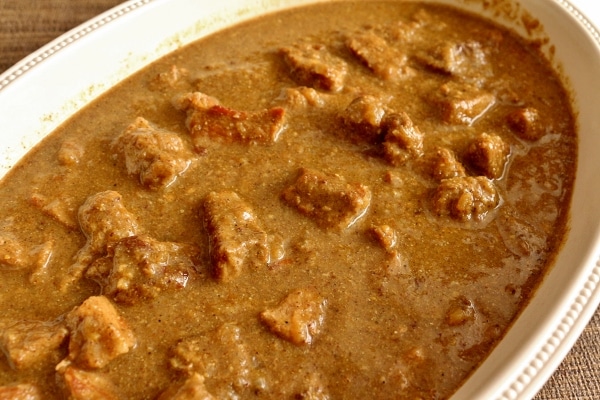 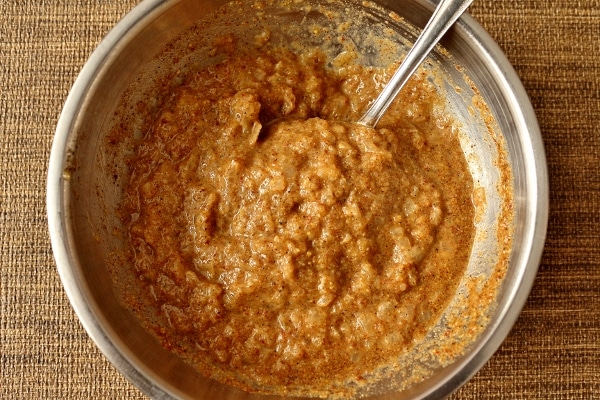 A ginger-garlic paste adds even more flavor to this incredibly flavorful and intense curry. Although the ingredient list may seem daunting, if you have a well-stocked pantry, it may only require purchasing a few specialty items (such as the fenugreek, for example–I got mine at Whole Foods). 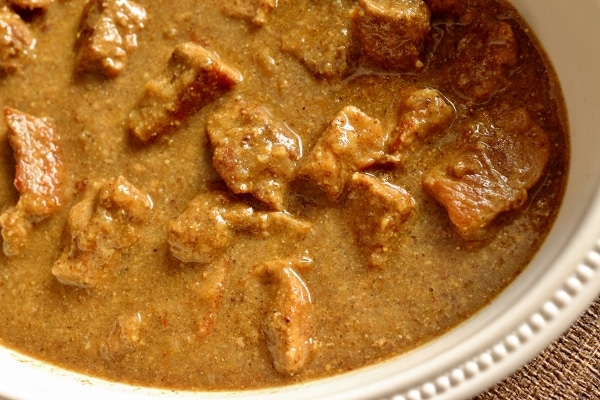 Even if you are hesitant about the notorious spiciness of a vindaloo curry, you can make it tamer by cutting down on the chilies and still retain it’s wonderful layers of flavor and spice that make a vindaloo such a popular and appealing curry both inside and outside of India. 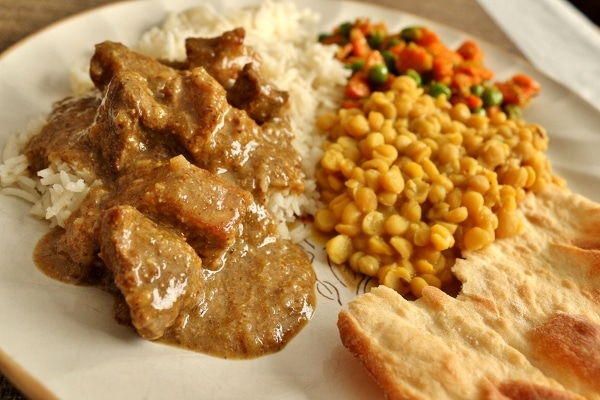 Heat a tablespoon of oil in a wide pot over medium heat. Add the onions and fry, stirring frequently, until the onions turn brown and crisp, but be careful not to burn. Remove onions and place into an electric blender or food processor. Add 2 or 3 tablespoons of water and puree the onions. Add this puree to the ground spice mixture in the bowl. (This is the Vindaloo paste. It may be made ahead of time and frozen.)

Rinse blender or processor and add the ginger, garlic and 2 to 3 tablespoons water and blend until you have a smooth paste.

Add another tablespoon or two of oil to the pot that you cooked the onions in, and heat over medium-high heat. Cook the pork cubes a few at a time, browning lightly on all sides. Remove each batch with a slotted spoon and keep in a bowl. Repeat until all the pork has been browned, removing the last of the seared pork and setting it aside with the rest.

Now add the ginger-garlic paste into the same pot. Reduce to medium heat. Stir the paste for a few seconds. Add the coriander and turmeric. Stir for another few seconds. Add the pork cubes and any juice that has accumulated in the bowl, the vindaloo paste, and 1 cup water.

Bring to a boil, cover and simmer gently for 1 hour or until pork is tender. Stir occasionally through this cooking period, and set the lid ajar toward the end of the cooking time if you need to thicken the sauce and allow it to reduce.

Serve the vindaloo with plenty of basmati rice and/or naan.