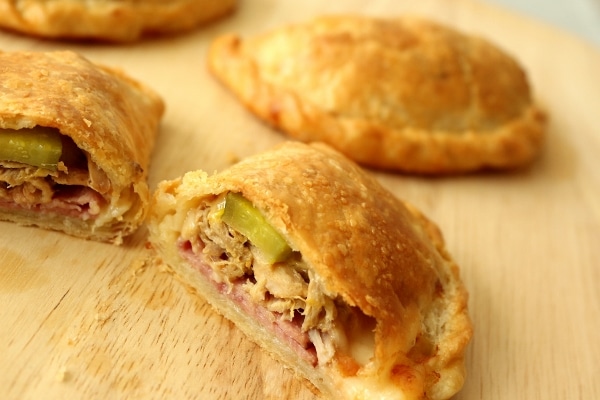 I recently received a review copy of Stuffed: The Ultimate Comfort Food Cookbook by Dan Whalen (published by Page Street Publishing Co.). I’m a big fan of comfort foods, but had not often considered the beauty of creating stuffed versions of my favorite dishes, sometimes stuffing one into the other.

I was excited to check out this book featuring tons of creative recipes, each sharing useful heat and pig-out scales to help determine which recipes to try (based on your spice tolerance and overall gluttony). This is fun and playful, keeping with the attitude of this outside-of-the-box cookbook.

The photography is only so-so (the lighting is on the harsh side), but there are photos included for many (but not all) of the recipes, so even though the photo quality doesn’t quite stand up to other cookbooks I own, it’s forgivable considering there are lots featured throughout. A matching photo usually adds to my desire to attempt a particular recipe.

It was quite a challenge to narrow down which recipe to try, and if it had been football season when I received this book I undoubtedly would have created a massive spread of several of the dishes for munching on during the game. In lieu of that, I was happy to indulge in a post-football feast. 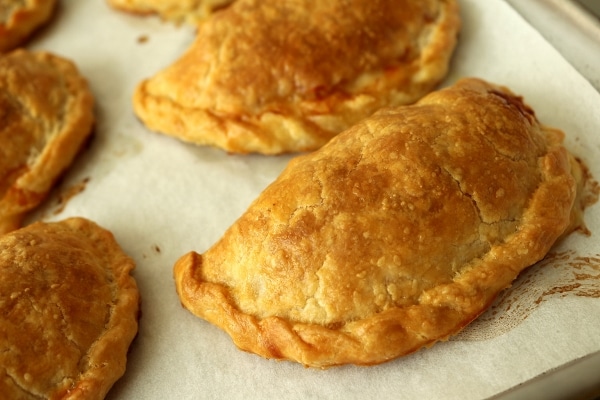 It’s actually the Stanley Cup Playoffs and so preparing yummy snacks while watching the big game is still totally relevant in my eyes. Also, many of these creations are perfect for game nights of any kind, which is actually the purpose for which I whipped up the first of my attempts from the book: Cuban Sandwich Empanadas for a night playing Cards Against Humanity with friends (best game ever!). 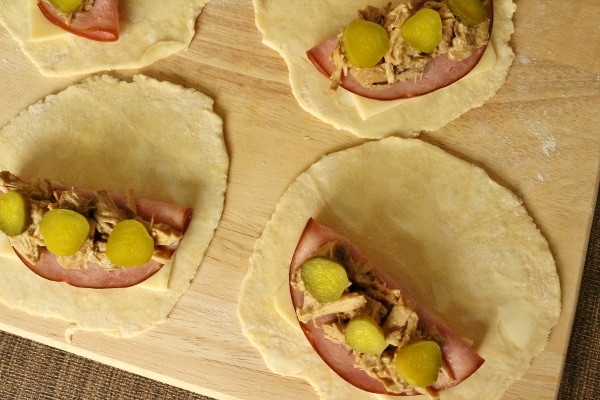 Although the roast pork filling isn’t super authentic Cuban, I like that the pork is essentially slow-roasted/braised in a mustardy concoction, which steeps that necessary mustard flavor from a traditional Cuban sandwich straight into the pork without having to add extra mustard to the empanada. I did end up with a lot of extra sauce even after shredding my pork and tossing it around in the sauce to moisten it, so I used a slotted spoon to remove the pork from the sauce before assembling so I wouldn’t end up with soggy empanada filling. 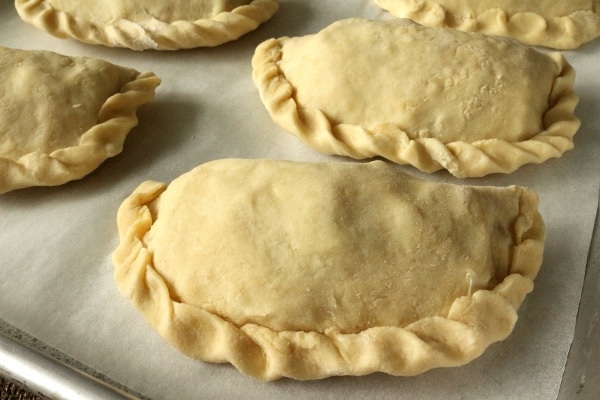 I also cut down on the amount of cheese. It called for 16 slices Swiss cheese (2 per empanada) but Swiss cheese slices can be pretty large especially if you get them at the deli, so I actually used only 8 slices, each of which I cut in half and placed one half on the bottom and one on top of the filling. I had baby dill pickles and not regular pickles, so I sliced some of those up and used an extra slice per empanada since they are smaller. Also, please note that although the original recipe states it yields 8 small empanadas, I would use the term large to refer to these bad boys. They are about 5 inches across. Not small and easily shareable. 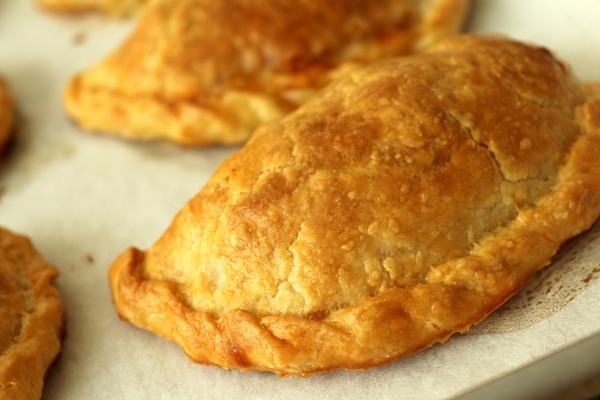 The flavor is huge. Although I baked and didn’t fry, the buttery crust was flaky and delicious, while the piping hot filling was the perfect balance of smokiness from the ham, gooeyness from the cheese, juiciness from the mustardy pork, with acidity from the pickles. Everyone who tried one said it was awesome, and I can’t help but agree! These will make it onto a future game day menu again regardless of the sport or activity. 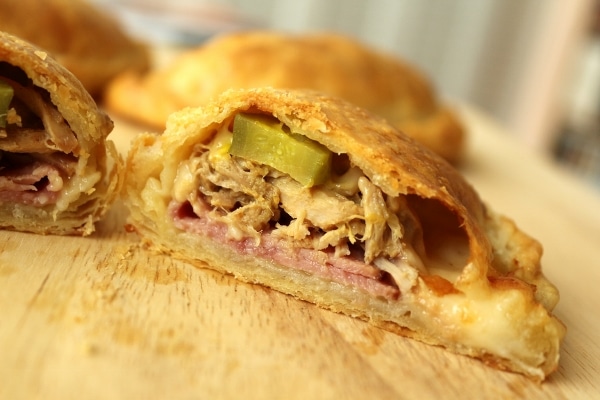 I also couldn’t resist trying the Cheddar Sriracha Stuffed Mushrooms. They are even easier to make than the empanadas, and much faster too. The recipe calls for only 15 to 20 cremini mushrooms, but especially since mushrooms vary in size I definitely suggest using the ample stuffing to fill even more mushrooms if you’d like. I generously filled 34 cremini mushrooms from two (10-ounce) packages. There were larger mushrooms and smaller ones, but I filled each and every one. The more the merrier!

I replaced the shallot in the original recipe with garlic and omitted the jalapenos entirely. The sriracha is more than enough spice for these mushrooms, but you can definitely mince up a couple jalapenos and add them to the filling if you’d like.

These mushrooms were just as popular as the empanadas. The spicy, cheesy filling was perfection and a great go-to idea for a last minute appetizer or snack for any gathering. Just like the empanadas, these guys will be gracing the table at many future game nights as well as for watching my favorite sporting events.

Stuffed is full of really fun and creative ideas, putting spins on many classics with easy to follow instructions. Although authenticity isn’t the main attraction here, using ethnic fusion to think outside-of-the-box definitely makes this a fun cookbook for anyone who enjoys entertaining. Most of the recipes are best suited for parties and less so for everyday eating.

Chop the pork into 1-inch cubes. Toss in the vinegar, mustard and Worcestershire sauce. Place in an oven-safe frying pan or small baking dish and cover with foil. Bake for 2 1/2 hours, stirring once halfway through the cooking time. Remove from the oven and shred the pork with the cooking liquid. If there is a lot of excess cooking liquid, use a slotted spoon to remove the pork from the excess sauce before using it in the empanadas.

Make the dough: Mix the flour and butter in a bowl. With your fingers, work the butter into the flour until it creates small crumbs. Then beat the egg into the water and pour the water/egg mixture into the flour and mix with a fork. Once it comes together, begin kneading with your hands until the dough is smooth, but not too long because you don’t want to soften the butter too much. Refrigerate for at least 15 minutes.

Stuff it!: Roll out the empanada dough into 8 thin rounds. Place half a slice of Swiss cheese followed by a slice of ham, one-eighth of the pork filling, 2 pickle slices, and another half a slice of Swiss cheese onto each round, placing them off to one side. Fold the round over and seal by lightly wetting the edge with your finger. Fold the edge of the dough over itself repeatedly from one end to the other to form the traditional empanada look.

Cook it: You can bake or fry these empanadas. To fry, heat vegetable oil in a Dutch oven to 350 degrees F (180 degrees C). Gently drop in your empanada and let it cook until browned, about 2 minutes. If you want to bake it, set the oven to 400 degrees F (200 degrees C) and line a baking sheet with parchment paper, placing the empanadas on top. Beat the egg with the water and brush it evenly over the tops of the empanadas. Bake until golden brown, about 30 minutes.

About 30 baby bella or cremini mushrooms