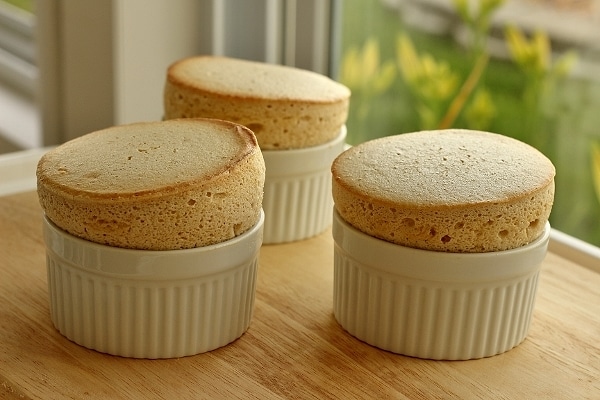 If I were to sing you a song listing all my favorite things, I’d likely replace “raindrops on roses” with “anything French whatsoever.” It doesn’t quite have the same ring to it, but I assure you, it beats out raindrops on roses (unless of course those roses are in the gardens of Versailles). 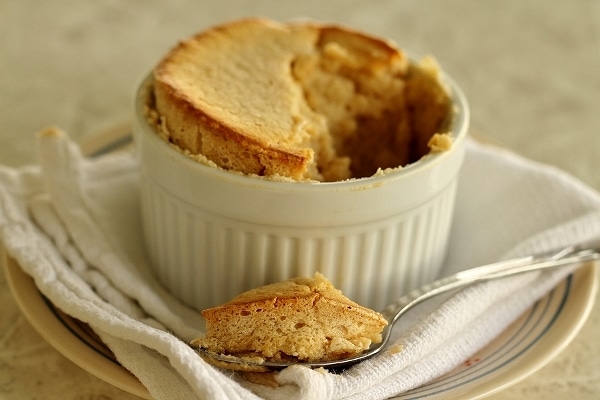 My Francophilic obsession started at a young age, progressed through my college years where I lived in specialty university housing called the French House*, and deepened furthermore through trips to France (though not nearly enough, if you ask me!). 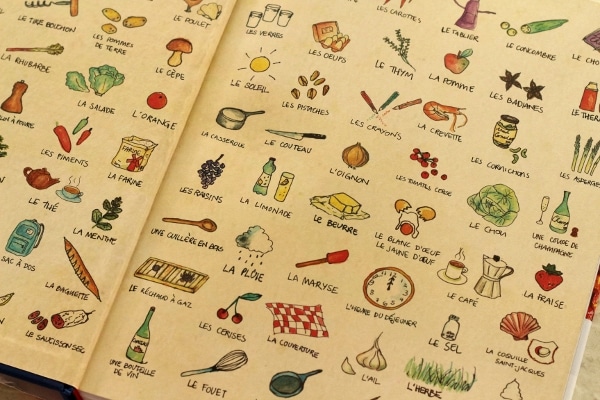 Oh yeah, and with every bite of French food I fell more and more in love. My heart stops at the sight of warm and crackly baguettes, decadent charcuterie, flaky croissants, butter-and-garlic-drenched escargots, and perhaps the most wonderful artery-clogging adventure** in all of France–cassoulet. 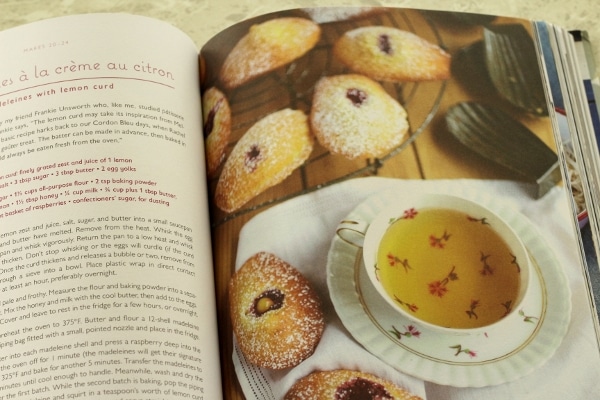 My collection of French cookbooks is pretty serious as well. They range from clean-cut classic to revolutionary and modern. Each new French cookbook that enters my inner circle must meet certain requirements. It can’t simply take up space. It needs to contribute. 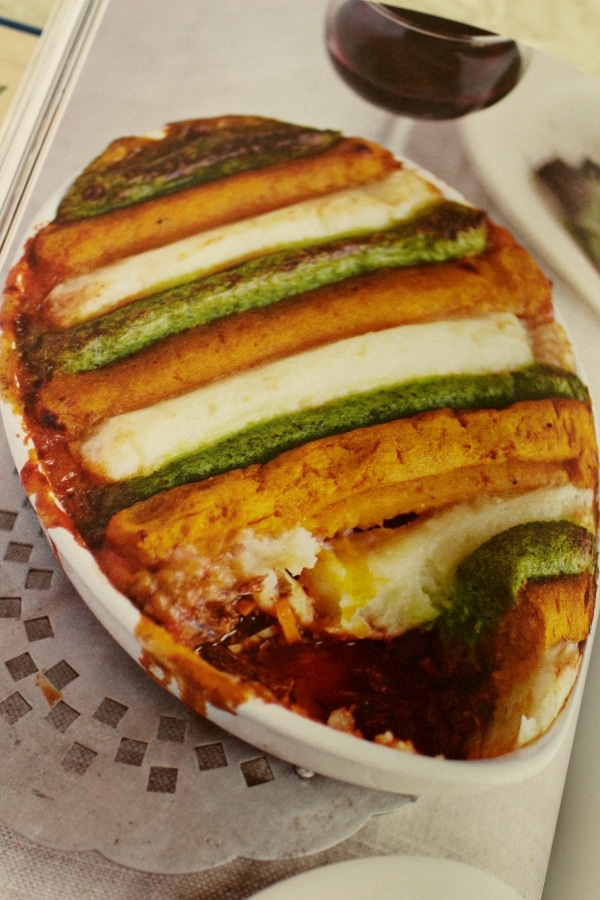 Rachel Khoo’s The Little Paris Kitchen, which takes its name from Khoo’s popular BBC cooking show, is a solid contributor. It easily holds its own among other deserving contenders with recipes that pay homage to classics while stepping out of the box. Khoo shares her recipes in a very comprehensive manner that showcases realistic French meals for those of us who realistically wish we were French (every damn day!). 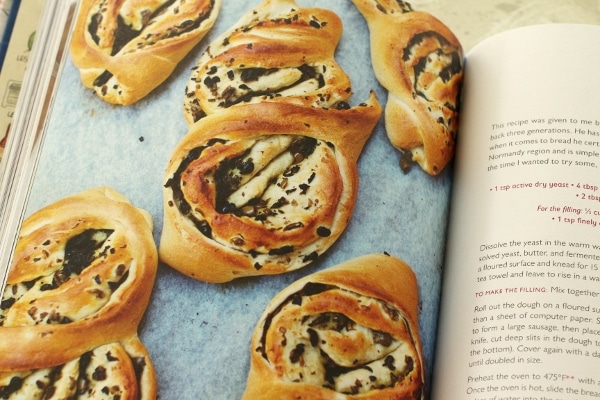 Here’s how the book breaks down: Everyday Cooking features simple recipes that are mostly eaten at lunch or supper, Snack Time includes recipes for afternoon pick-me-ups that are as typical in France as afternoon tea is in England, Summer Picnics is inspired by picnics depicted in classic French paintings (picnicking is über French!), Aperitifs focuses on cocktail parties and entertaining, Dinner with Friends and Family is about the traditional French meal and includes many classics and updated variations on classics, Sweet Treats is the reason why so many people fall in love with French food–the desserts, and finally French Basics fills in all the blanks in between. 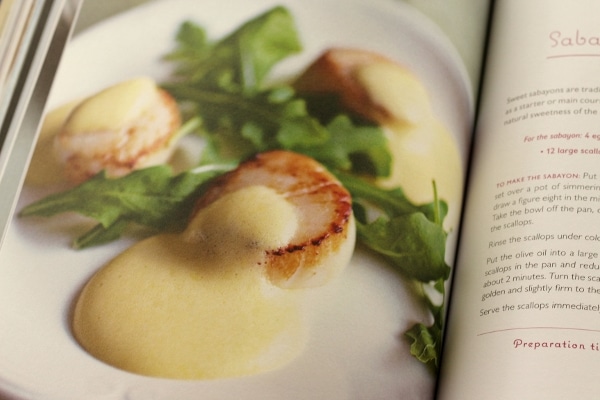 If you think this is just another French cookbook, let me assure you, it’s really not. There are so many lovely twists on classics that I can’t wait to try. To name a few, Khoo’s Cassoulet Soup with Duck and Toulouse Sausage Dumplings is incredibly easy to prepare in comparison to actual cassoulet (which takes days!), and yet looks equally as appetizing, her Boeuf Bourguignon with Baguette Dumplings is such a clever way to add texture (and delicious carbs) to this already comforting dish, and additionally her Coq au Vin on Skewers is a very playful twist on a very old-school French dish. These are just 3 examples out of 120 simple but wonderful recipes found in this book. 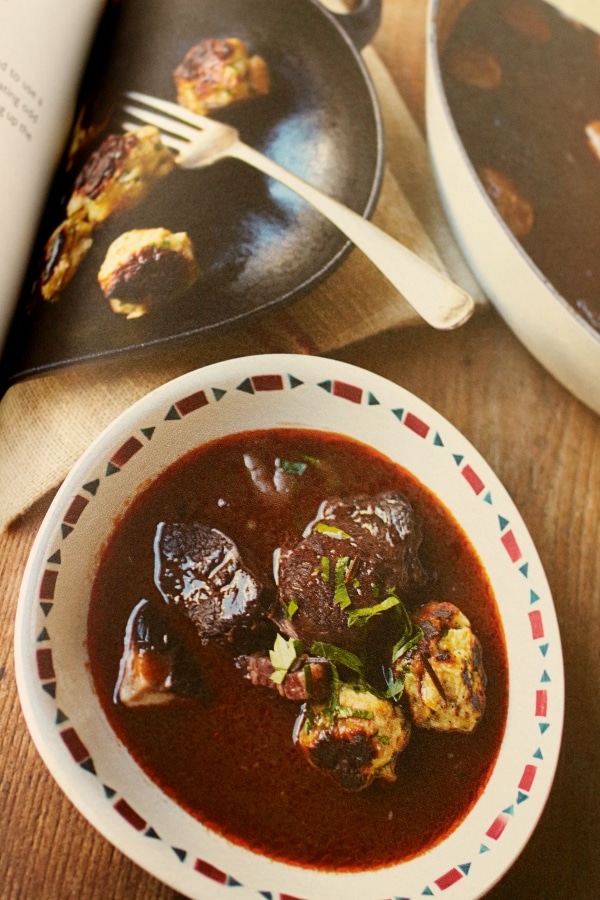 I decided to indulge my sweet tooth by trying a recipe from the Desserts chapter. Khoo offers several flavor varieties for souffles with a very straightforward and easy approach. Her pastry cream can easily be adjusted from plain vanilla bean to mocha, lavender, citrus, and more. I decided to use loose-leaf tea to make tea souffles! Although I originally planned on utilizing some Earl Grey tea, per her suggestion, I settled on some incredibly fragrant Chocolate Cherry Bon Bon tea, which was a wonderful stand-in. 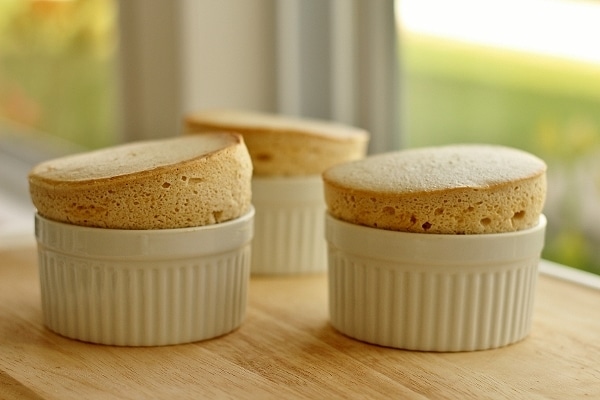 First of all, the American version of this cookbook features volume measurements, while I’m quite certain the European version includes weights. In the baking recipes in particular, weights would have been very useful, and in my eyes they are sorely missed. Even with volume measurements (which are albeit more American-friendly), my results were excellent. 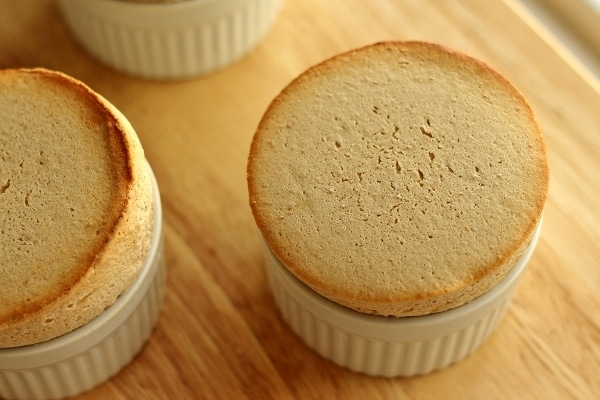 I wanted to make 6 souffles, so I took her basic recipe and multiplied it by 1 1/2. Here’s where I ran into a little trouble. Khoo does not specify what size ramekins she uses (anywhere in the book). The ramekins I have are 8-ounces each. That’s a pretty standard size here in America. I later reached out to the folks at Chronicle Books and they were able to ask Rachel herself what size she uses. Her answer was 3-ounce ramekins, and that “this might seem quite small but it’s the standard at Parisian restaurants (where serving sizes are a lot smaller than in the US).” 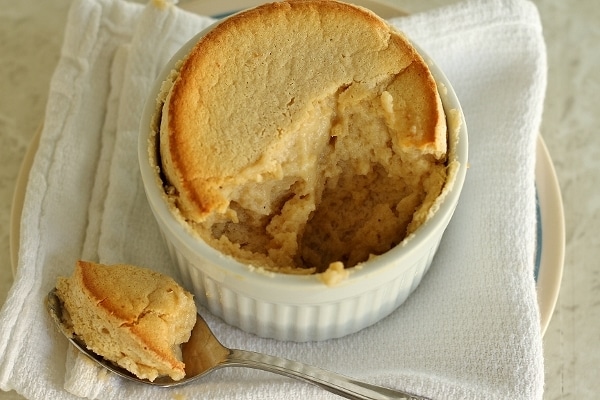 I think for the amount of batter this recipe yields you could easily use it for 4-ounce ramekins or maybe even 6-ounce ones, if that’s what you have. Honestly, the math doesn’t really add up for this to make four 3-ounce souffles. You will definitely end up with more than four souffles at that size (or throw away extra batter, which is just a waste). Just a heads up. I really wish that was clear in the book to begin with, but unfortunately this seems to be a common oversight in MANY cookbooks that don’t always clarify that information. I’m glad I was able to clear this up now, and at least in the future will plan to use much smaller ramekins for this recipe. 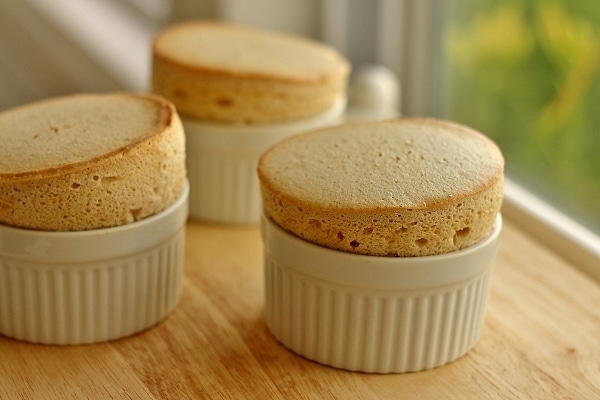 In any case, the souffles, although larger than they were meant to be I suppose, were fantastic! They rose beautifully and had a wonderful texture and flavor. They took over 30 minutes to bake since they were significantly larger, and were a bit on the sweet side, but I was most definitely in love! I also love how easy they were to prepare! Making pastry cream in advance and then whisking together a meringue for final assembly makes souffles far more practical than one would think. 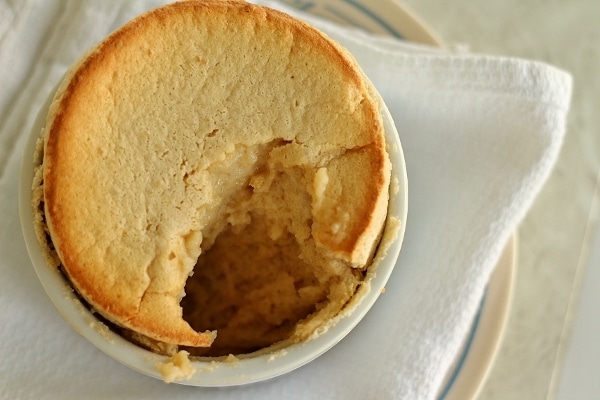 I thoroughly enjoyed checking out The Little Paris Kitchen, but really wish that weight measures were included in the American version of the book as well (especially for baking recipes). Even without a notation of ramekin sizes, my souffles still turned out quite stellar. I really have no major complaints! I will happily cook from this book again, and would heartily recommend it to any of my French food-loving friends.

*Today is actually my best friend’s birthday! We met while living in the French House in college. It seems appropriate that I share a French recipe today, especially one including tea, one of her favorite things. Happy birthday, AJ!

**I can think of several other candidates for this honor 🙂 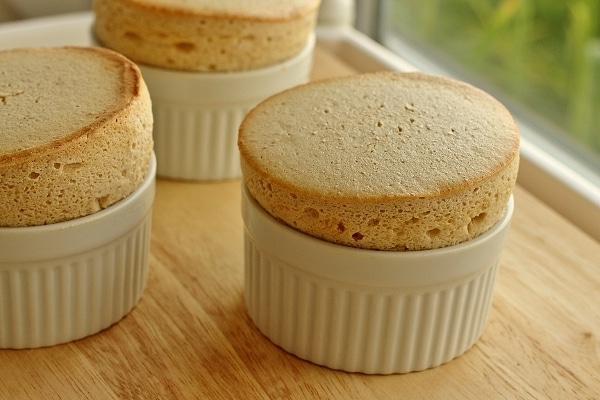 Tea Souffles
Makes 4 (ideally, I think you can easily make 6 souffles at the 3-ounce size the recipe suggests)
(Adapted from The Little Paris Kitchen)

To make the pastry cream: Whisk the eggs with the sugar until light and thick, then whisk in the cornstarch.

Add the milk and tea to a saucepan and bring to a boil. Switch off the heat and let the tea steep for a few minutes. Strain the milk into the egg mixture in a slow stream, whisking constantly.

Return the mixture to a clean pot and continuously whisk over medium heat. Make sure to scrape the sides and bottom, otherwise it will burn. The cream will start to thicken. Once it has thickened and released a few bubbles, remove it from the heat.

Strain it (to remove any lumps) onto a tray lined with plastic wrap. Cover with plastic wrap, pressing the plastic wrap so it sticks directly onto the cream and refrigerate for at least an hour before using. This can be make up to 3 days in advance. This will yield about 1 1/2 cups pastry cream, which is exactly how much you will need for the souffles.

Preheat the oven to 400 degrees F. Brush four 3-ounce ramekins with soft butter, working in upward strokes from the bottom to the top (I’m confident that you can yield more than four souffles at this size based on my kitchen math, or plan on using slightly larger ramekins–a 5-ounce ramekin would probably be closest to resulting in four souffles from my experience making these). Check that the entire inside of each dish has been covered with butter before adding a heaped tablespoon of sugar. Roll and tilt each ramekin so that the sugar coats the inside evenly. Repeat with all of the ramekins, reusing the excess sugar from the previous ramekin and adding more as needed.

To make the meringue: Put half the egg whites into a clean glass or metal bowl (one attached to an electric stand mixer is great to save your arm the workout). Add the confectioners’ sugar, lemon juice, and salt and whisk until snow white. Add the rest of the egg whites and continue whisking until the meringue forms stiff peaks.

Beat the pastry cream until smooth and then mix in half the meringue until fully incorporated. Gently fold in the rest of the meringue.

Divide the mixture between the ramekins and tap the base of each ramekin on the work surface to ensure there are no air pockets. Level the surface of each souffle by pulling a palette knife (or the back edge of a large knife or an offset spatula) across the top of the dish, then clean any drips off the outside or they will burn. To help the souffles rise, run your thumbnail around the top edge of each ramekin to make a groove.

Put the ramekins into the oven immediately and reduce the temperature to 350 degrees F. Bake for 15 to 20 minutes or until the souffles have risen by two-thirds of their original size and wobble a little when moved. Serve immediately.