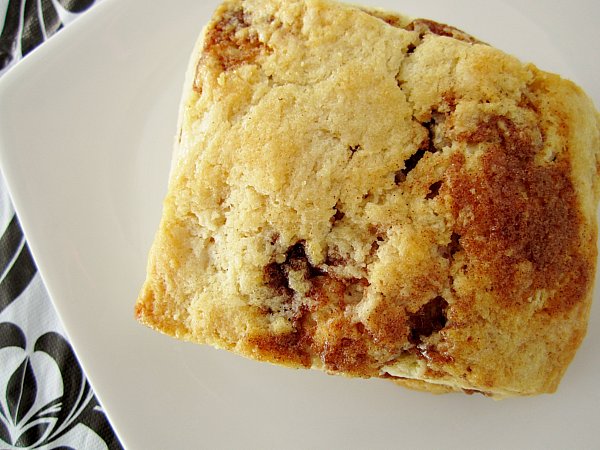 About a month ago I shared a review of an amazing recently released cookbook for advanced bakers: Bouchon Bakery. I had made 4 different recipes from the book before drafting my review and selecting a recipe to share. I have since experimented a bit more from the book, trying out the vanilla macarons and the cinnamon honey scones.

The macarons were for the most part a disaster, and I’ll tell you why. For whatever reason, the recipe has you make the meringue, but then tells you to only fold in some of it until you reach a particular texture. I was stunned that it would have me make so much extra meringue that wouldn’t be used, and I’ve never seen another macaron recipe give amounts that weren’t 100% used in the recipe. 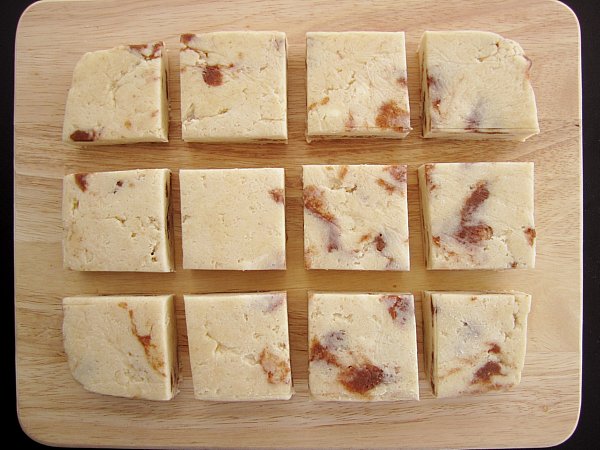 In folding in the meringue, I added a bit too much and my mixture became too soft and nearly impossible to pipe. The macarons spread out into odd shapes and even touched their neighbors. Shockingly, when they were baked in the oven, they actually formed nice shiny skins and feet so I can see how the recipe could be successful if the proper amount of meringue was used. For the most part, they went into the garbage, and I will be trying a different recipe next time that tells me EXACTLY how much meringue to make and use and not something I have to judge with my own inexperienced eyes.

The other recipe I made was one I had been wanting to try from the very beginning: the cinnamon honey scones. I have seen rave reviews for both the chocolate cherry scones and bacon cheddar scones on other sites and Amazon, but it was the cinnamon honey ones that shined in my eyes. They looked gorgeous with the marbled look of the cinnamon honey cubes mixed into the dough. I also thought it was really cool how in the book, each of the 4 scone recipes utilized a different shape. This would be nice to keep in mind for other scone making too to help identify individual scone varieties and make them each special in their own way. The plain scones are cut into triangles, the cinnamon honey scones are cut into squares, the chocolate cherry ones are scooped with an ice cream scoop, and the bacon cheddar are shaped into rectangles.

Also good to note: all of the scones recipes require the dough to be shaped, refrigerated, then cut into pieces and frozen. The scones are all baked from a frozen state which does make it easier to satisfy a last minute scone craving if you keep a stash of these in your freezer for lazy Sunday mornings. We were having company over so I baked all of them at once. I included the original honey butter glaze recipe, but would like to point out that I halved it and thought it was just enough glaze for my 12 scones. A little extra glaze wouldn’t hurt though if you made the full amount. 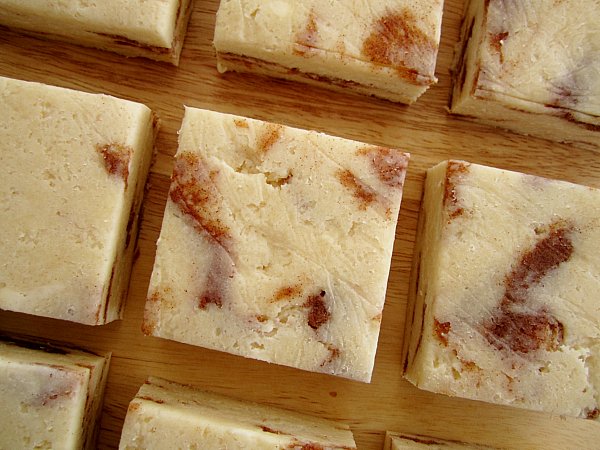 These scones were not only beautifully marbled and aesthetically pleasing, but they were incredibly tender and oh so delicately sweet. Nothing worse than overly sweet scones and these are just perfect on the sweetness scale. The touch of sweet glaze on top adds just a bit of shine and an extra pop of honey flavor. The cinnamon flavor is quite mild because it is only found in the streaks from the cinnamon honey cubes but I prefer this affect as opposed to just mixing cinnamon into the base dough, which would dilute the flavor more and also lack the aesthetic appeal of the cubes. 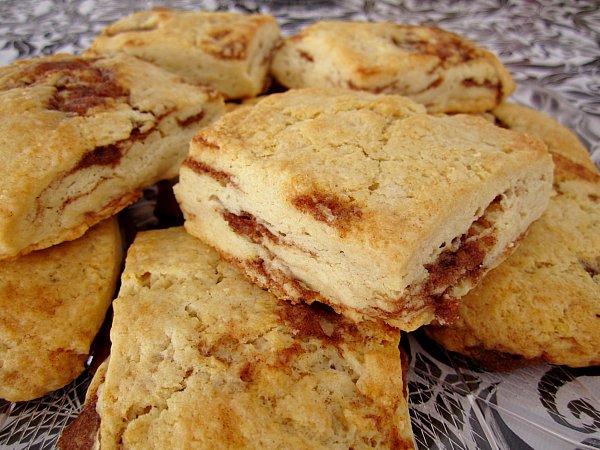 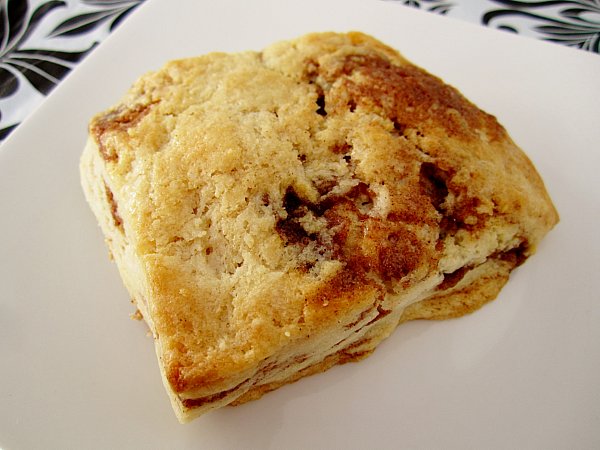 For the cinnamon honey cubes: Place flour in a medium bowl. Sift in the sugar and cinnamon and whisk to combine. Toss in the butter cubes, coating them in the dry mixture. Using your fingertips, break up the butter until there are no large visible pieces. Using a spatula, mix in the honey to form a smooth paste.

Press the paste into a 4-inch square on a sheet of plastic wrap. Wrap tightly and freeze until solid, about 2 hours. (The paste can be frozen up to 1 week.)

For the scones: Place the all purpose flour in the bowl of a stand mixer and sift in the cake flour, baking powder, baking soda, and granulated sugar. Fit the mixer with the paddle attachment and mix on the lowest setting for about 15 seconds to combine. Stop the mixer, add the butter, and on the lowest setting pulse to begin incorporating the butter. Increase the speed to low and mix for about 3 minutes to break up the butter and incorporate it into the dry mixture. If any large pieces of butter remain, stop the mixer, break them up by and, and mix just until incorporated.

With the mixer running, slowly pour in the cream. Add the creme fraiche and mix for about 30 seconds until all the dry ingredients are moistened and the dough comes together around the paddle. Scrape down the sides and bottom of the bowl and the paddle and pulse again to combine.

Cut the cinnamon honey paste into 1/4-inch cubes. Once the scone dough is mixed, mix in the cubes by hand. Mound the dough on the work surface and, using the heel of your hand or a pastry scraper, push it together. Place the dough between two pieces of plastic wrap and press it into a 7 1/2-by-10-inch block, smoothing the top. Press the sides of your hands against the sides of the dough to straighten the edges. Wrap the dough in plastic wrap and refrigerate for about 2 hours, until firm.

Line a baking sheet with parchment paper of silpat. Using a chef’s knife, cut the block of dough lengthwise into thirds and then crosswise into quarters. You will have twelve 2 1/2-inch squares. Cover with a plastic wrap and freeze until frozen solid, at least 2 hours, but preferably overnight. (The scones can be frozen for up to 1 month.)

Preheat the oven to 325 degrees F (convection) or 350 degrees F (standard). Line a sheet pan with a silpat or parchment paper.

Arrange the frozen scones 1 inch apart on the sheet pan. Bake for 20 to 23 minutes in a convection oven, or 28 to 30 minutes in a standard oven, until golden brown.

For the glaze: Stir the butter and honey together in a butter warmer or a small saucepan over medium-low heat until the butter has melted and combined with the honey.

As soon as you remove the scones from the oven, brush the top with the glaze. Set the sheet pan on a cooling rack and cool completely. The scones are best the day they are baked, but they can be stored in a covered container for 1 day.

Combine the cream and buttermilk. Cover and let stand at room temperature (about 70 degrees F) for 8 to 24 hours, or until very thick. Stir well, cover and refrigerate for up to 10 days.

*Note* This recipe can easily be doubled to make 1 cup, if desired.