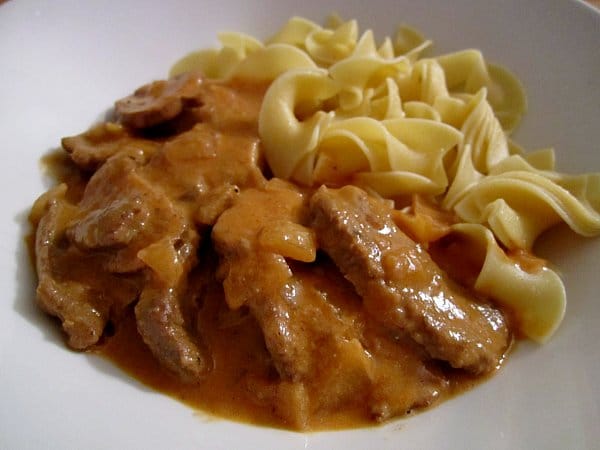 Last spring I reviewed Frank DeCaro’s first cookbook, The Dead Celebrity Cookbook. I thought it was fun, playful, kinda campy, but a nice addition to any movie buff’s cookbook/book collection. His followup cookbook was recently released, this one an ode to Christmas movies and their stars. The title: The Dead Celebrity Cookbook Presents: Christmas in Tinseltown. All of the celebrities featured in this book are deceased, just like in the last book, so don’t expect to see any of your modern Christmas favorites featured in the book, but a lot of classics are included such as Miracle on 34th Street, It’s a Wonderful Life, I’m Dreaming of a White Christmas, and even our favorite animated Christmas features like a Charlie Brown Christmas and How the Grinch Stole Christmas.

With Christmas around the corner, and my eternal love of Christmas movies, exploring this book was fun and definitely got me in the mood. I’m not familiar with all of the celebrities in the book, but it was still fun flipping through the book, reading the biographies and seeing what recipes were included this time around. The recipes are totally different from the previous book, which had a more appealing spread, in my opinion. There were still several options that I thought would be fun to try. As a skilled cook, I found many of the recipes to be less than a challenge for myself, but that is expected of celebrity recipes in general. They are not chefs, and no one expects them to be. I was impressed that Fred Astaire made his own noodles from scratch for his Chicken Noodle Soup 🙂 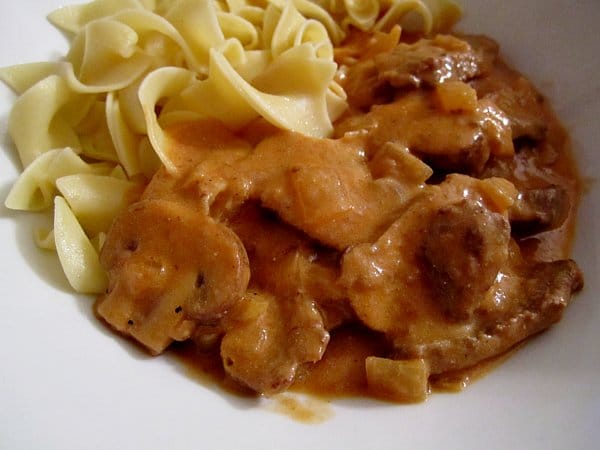 I had been craving Beef Stroganoff since my visit to the Russian Tea Room in NYC last spring. That was a very upscale version, featuring truffles, but regardless of the comparison I wanted to replicate some of those comforting flavors. Natalie Wood’s Beef Stroganoff (from the Miracle Whip on 34th Street chapter) was a tad different from the typical recipes I’ve seen, which feature beef broth or stock to make the backbone of the sauce. In her case, she uses tomato juice. I was unsure, but decided to go through with it anyway. You could use beef broth instead if you really wanted. I also added a bit of Dijon mustard, which I find rather traditional and a great flavor in the dish. 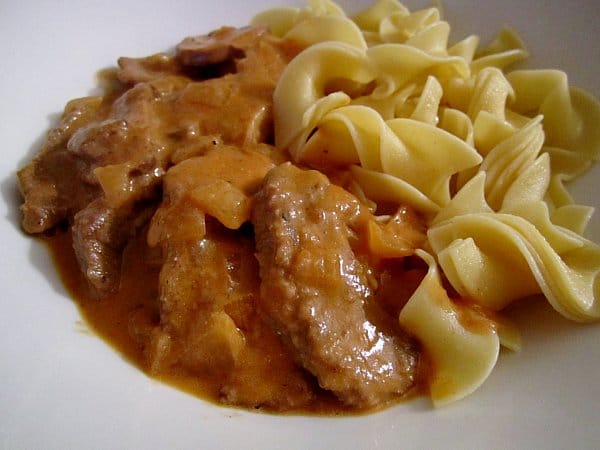 Honestly, I really liked this Stroganoff! The tomato aspect to the sauce was unique, but reminded me of some of my favorite meaty tomato-based pasta sauces, especially since I served the dish over broad egg noodles. With that one exceptional difference, many of the other components were in line with what one would find in an old-school recipe of the sort. One other major change I made was cooking the dish for less time. She suggested stewing it for about 1 1/2 hours, but for sirloin that would simply be destructive. About 10 minutes was more like it! The meat stayed nice and moist. I have already had requests to make this dish again 🙂 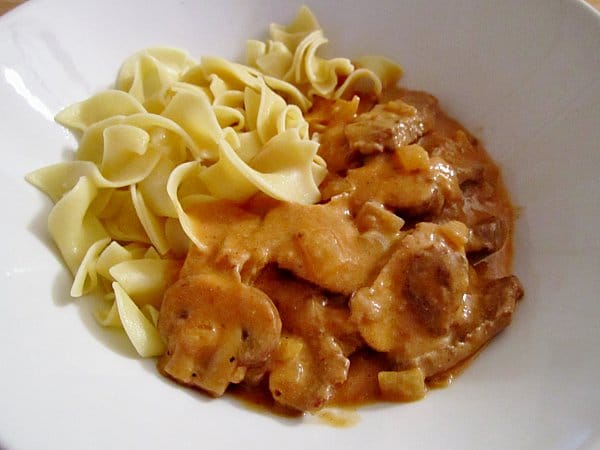 Slice the beef into thin strips and dredge them with flour, shaking off excess. In a skillet over medium heat, brown the meat quickly in batches using half the butter and olive oil. Remove the meat and set it aside. Add the remaining butter and olive oil to the skillet and saute the onions and mushrooms for about 5 minutes or until they begin to soften.

Return the meat to the pan. Season with salt and pepper. Add the mustard, tomato juice, water, and wine and slowly bring to a boil. Cover and simmer over low heat, stirring occasionally, for about 10 to 15 minutes until the flavors are developed and the meat is still tender. Just before serving, stir in the sour cream and heat through. Serve the stroganoff over egg noodles.

Dunderi with Lemon and Butter