Have I mentioned recently that The Whole Hog Cookbook is one of my absolute favorites in my collection? And to think it was released less than a year ago, but still had ample time to fill my heart with even more love for pork. Although I used my own pie crust recipe (it’s my favorite), the rest of the brilliance behind this recipe comes straight from the brain of Libbie Summers.

Encased in a flaky, buttery crust is a mixture of vibrant orange sweet potato and meaty ground pork. It is bound with a mixture of spices, some chopped onion, and a touch of applesauce. This perfect balance of savory and sweet makes my heart sing.

I strongly feel that this pie would be a great crowd-pleaser for your family (my 3 year old nephew loved it as much as we did), and also a very pretty centerpiece for a table surrounded by guests. It’s a nice alternative to other savory pies, such as chicken, turkey, veggie, or even lobster pot pies. Both the crust and the filling can easily be prepped ahead of time and then assembled and baked just in time for dinner!

In a large saucepan over medium-low heat, combine the pork, onion, vinegar, salt, pepper, and 1/4 cup water. Simmer until the pork is no longer pink. Remove from the heat and stir in the cinnamon, cloves, sweet potatoes, applesauce, and parsley. Let the mixture cool while you roll out the pie dough.

Preheat the oven to 425 degrees F.

On a lightly floured surface, roll out a round of the dough to a 12-inch circle. Drape it over a 9-inch pie plate, allowing it to fall naturally into the plate. Do not stretch the dough. Fill the pie with the pork mixture and set aside. Roll out the second round of dough to an 11-inch circle and drape it over the top of the pie. Trim the edges and decoratively crimp.

Make an egg wash by beating the egg together with 1 tablespoon water. Cut four vents in the top of the pie and brush the top with the egg wash. Bake for 30 minutes, or until the crust is golden brown. Slice and serve.

In a small bowl add the salt to the water and stir to dissolve. Keep cold in the refrigerator.In a food processor, put the flour in the work bowl and add the small butter cubes, scattering all over. Pulse briefly until the mixture forms large crumbs and some of the butter is still the size of peas. Add the water-salt mixture and pulse for several seconds until the dough begins to come together in a ball. You should still be able to see some butter chunks.

On a lightly floured surface, divide the dough into two equal balls and shape each ball into a disk 1 inch thick. Wrap well in plastic wrap and chill for at least 2 hours or up to overnight (this dough can now be frozen in a freezer bag and then defrosted in the refrigerator the day before it is to be used). 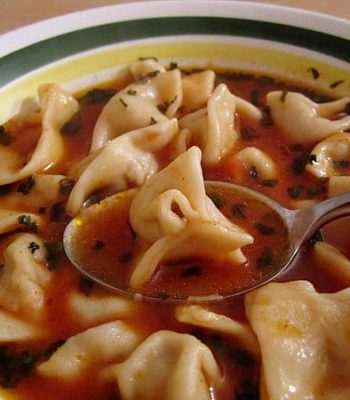