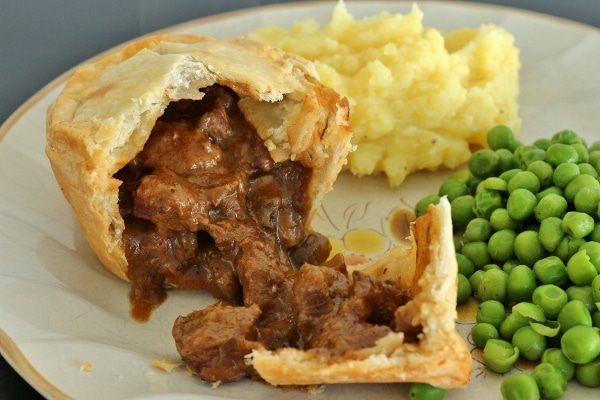 Clearly I love pie. No doubt about it. It’s one of my favorite things. If I were Maria from The Sound of Music, it would for sure make the cut into my version of the song. There are so many things I love about pie, but one of the most important reasons, and what makes great pie great and mediocre pie mediocre is the crust. 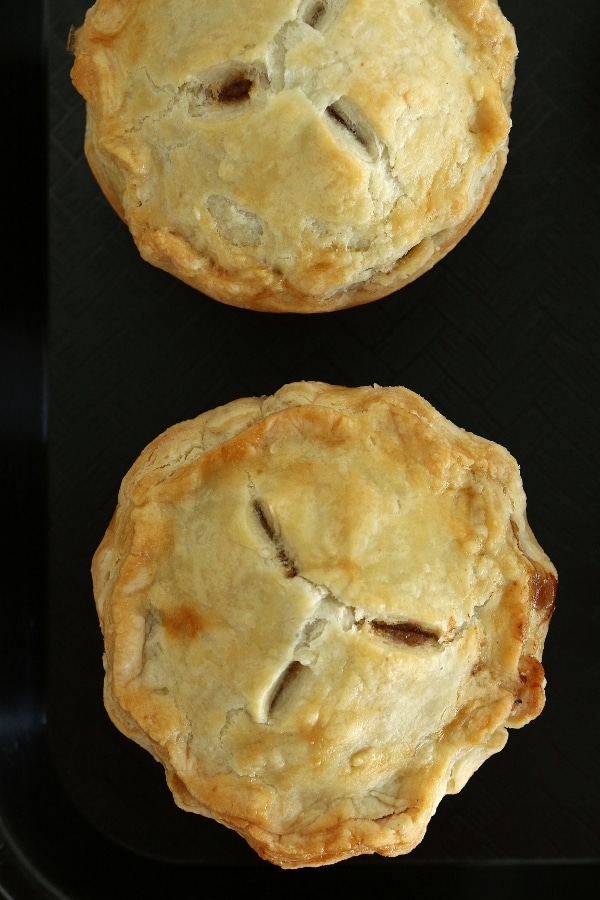 Store-bought crust is the devil. I’m sorry, I know it’s a great shortcut, but it is going to seriously impact the quality of your pie. Don’t do it. It’s easy enough to make pie crust from scratch. You can even use a food processor, although I often don’t bother since it’s not that hard to do by hand. Just give it a chance! 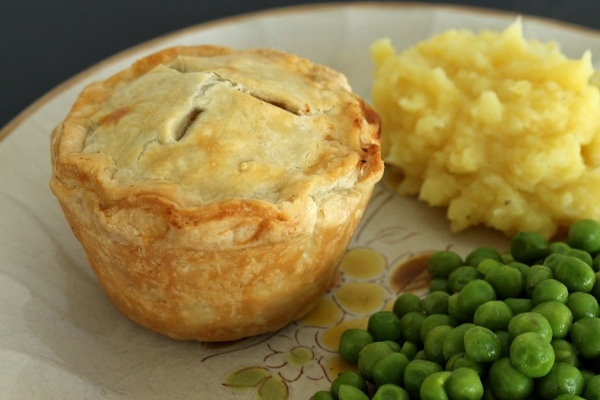 Although most of my pie endeavors are of the sweet variety, I love a good savory pie just as much. I’m traveling to Ireland in the near future, and although Ireland and the UK are not typically regarded as culinary powerhouses, I’d like to prove the world wrong, but that’s for another day. 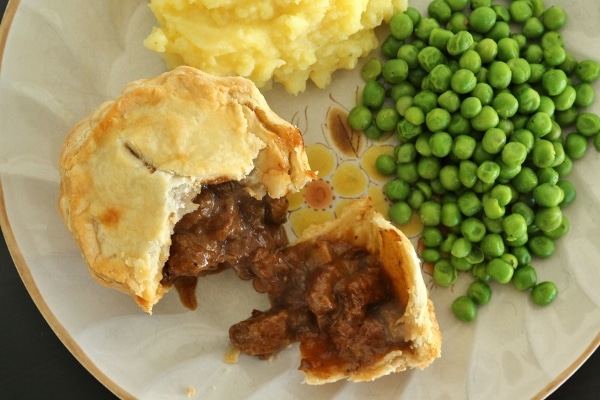 Today I’m sharing a recipe for individual beef and mushroom pies. These are probably a bit more British than Irish, as the latter would probably sway more towards a beef and Guinness stew as the filling rather than a broth-based concoction.

I used jumbo muffin cups to shape my mini pies, and that worked really well for both the size and shape. Please note, you don’t have to do this, but it might help: when you cut out the dough circles for your bottom crust, cutting out a wedge out of the circle will make it a bit easier to press your dough into the muffin cups without having the dough bunch up a lot. You can overlap some of the dough if needed and press to seal. You can also use some dough scraps to patch it up if you accidentally cut a wedge that is too large or too deep. Just as long as the muffin cup is fully lined, you’re fine. 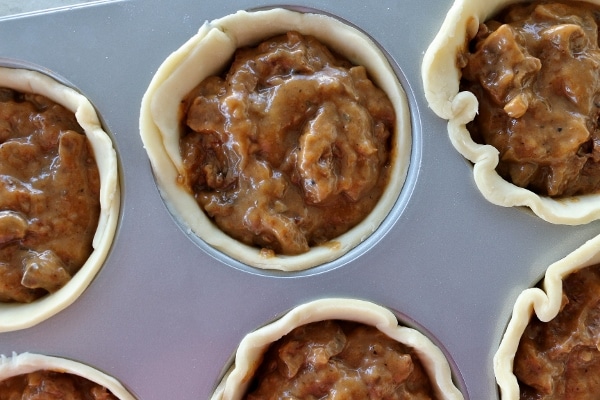 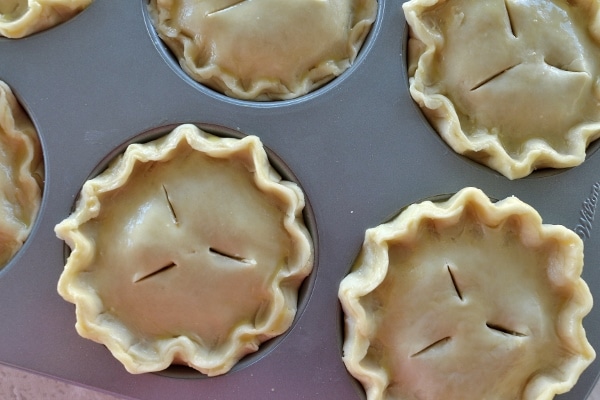 The filling is excellent, and considering it doesn’t include a million ingredients it’s really so flavorful. The small chunks of beef are perfectly fork-tender (they better be after stewing for a couple hours), and the bites of mushroom add another layer of hearty flavor. 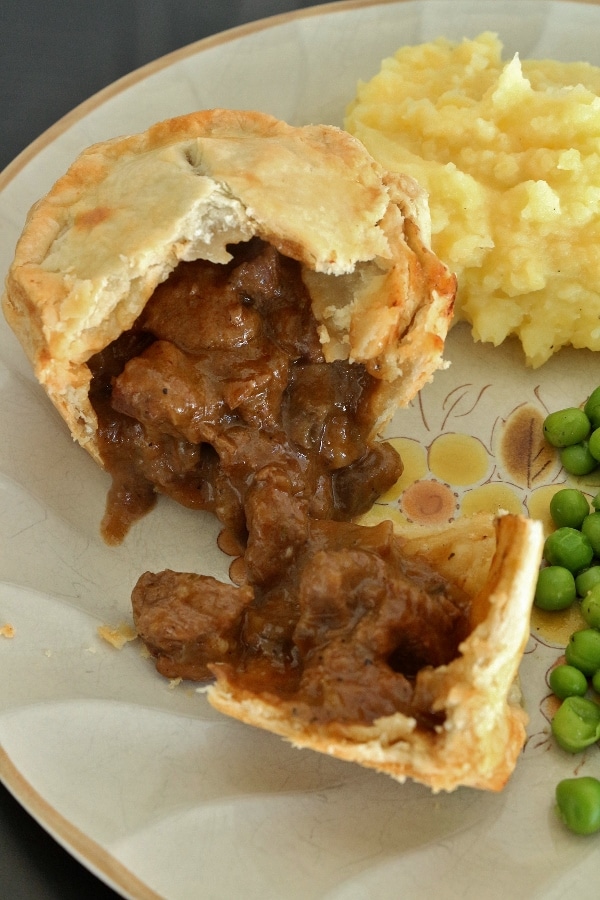 Shockingly the crust on these pies is incredibly crispy and flaky, and really stands up well against the soft, stewy filling within. I was thrilled to see that it didn’t get soggy at all! 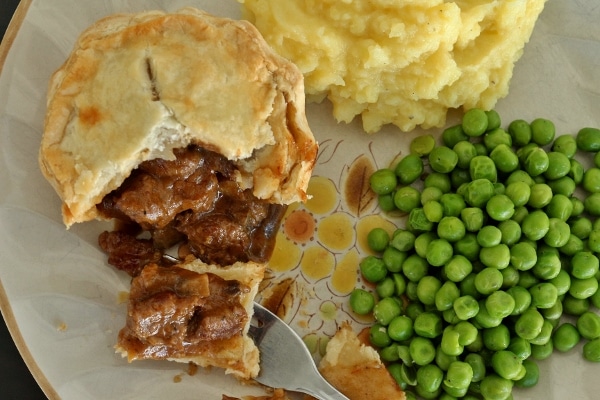 I’ve made these little pies a couple of times over the past months, and both times I did my prep work a day in advance (on a Saturday), cooking the filling, letting it chill overnight in the fridge along with my pie dough, and then rolled out and assembled the little pies on Sunday in time for dinner. They freeze really well too, so any pies that aren’t eaten immediately can be wrapped in plastic wrap, tossed in a freezer bag, and easily thawed and reheated for a weeknight meal some other time. 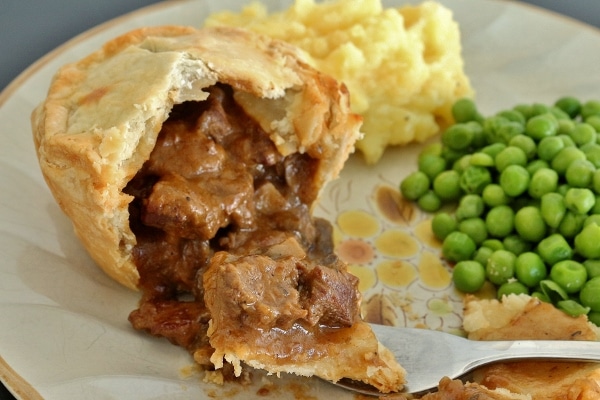 I serve these with simple mashed potatoes and peas tossed with a little butter, salt, and pepper. Simple perfection.

To make the filling, heat 1 tablespoon of oil in a Dutch oven over medium-high heat, and add the beef in two batches, searing on each side until crusty brown, about 4 minutes per side. Transfer each batch to a plate and set aside.

Add the remaining oil to the pan and reduce the heat to medium. Add the onions and mushrooms and cook, stirring and scraping up the fond (browned bits) until the onions and mushrooms have softened. Add the flour and mix until combined, then stir in the tomato paste. Slowly add the chicken broth, mixing well to make sure the flour doesn’t leave lumps. Return the beef to the pan, add the thyme, and season with salt and pepper, but be careful not to overseason as the mixture will reduce significantly. You can always season more later.

Lower the heat, cover the pan, and simmer for 1 1/2 hours, stirring occasionally. Remove the lid and continue to simmer uncovered for another 30 minutes, until liquid has reduced to a thick gravy-like consistency. Stir often to make sure the mixture doesn’t stick, especially once it has thickened considerably. Adjust seasoning as needed. Transfer to a bowl or storage container and let cool to room temperature. You can make the filling ahead of time and refrigerate for up to a couple days if needed. You’ll have about 3 cups of filling.

Preheat the oven to 425 degrees F. Remove the chilled dough from the refrigerator. On a generously floured surface roll out each of the discs to about 1/8-inch thickness. You will need to cut out 6 larger circles measuring about 6 1/2-inches in diameter, and 6 smaller circles at 3 3/4-inch in diameter. For the larger circles you can trace a knife around a plate. For the smaller circles, use a circular dough cutter or trace the top of the glass. You will likely need to re-roll the scraps from both disks of dough once in order to cut out enough circles.

Fit the large circles into the cups of a jumbo sized muffin pan. To make life a little easier, you can use your knife to cut a small wedge from one side of the circle before pressing the dough into the cups. This will keep you from having a rumpled piece of dough inside the cup. Just press the cut edges together to seal once the dough is fitted into the cup. You can also patch up with scraps of dough as needed if you accidentally cut the wedge too deep.

Fill each of the dough-lined muffin cups generously will the filling, about 1/2 cup into each. Take the smaller dough circles and brush the edges with a little water, then lay the smaller circles over the filling, and use your fingers to press and seal the dough. Crimp the edges if you’d like. Brush the tops of the pies with the egg wash, and use a sharp knife to cut a few slits to form vents. Bake for 15 minutes, then reduce the heat to 350 degrees F and continue baking for another 30 minutes, or until the pies are golden brown.

Remove from the oven and use a thin knife to gently pop each of the pies out of the muffin cups. You could also flip over the pan, but this could be dangerous if any of the pie tops are a little loose. These pies can be individually frozen and reheated at a later time.