The easiest dumpling recipe you’ll likely ever find! These vegan Edamame Dumplings are the fastest dumplings to make. The filling is simple, yet incredibly flavorful, making these some of the most popular dumplings in our repertoire!

I’ve made a lot of dumplings over the years. They range in styles and methods quite significantly. I’ve made them with homemade wrappers as well as store-bought, with meat fillings, seafood fillings, and veggie fillings. And I’ve loved them all. Dumplings are my jam. To me they are their own food group, and can easily be an entire meal.

I love the extra-chewy texture of a slightly thicker homemade dumpling wrapper. I equally love the convenience and speed of using store-bought wrappers from my local Chinese market. While I enjoy a juicy, unctuous meat filling, I also enjoy a lighter, more colorful veggie version. Delicious dumplings come in all shapes and sizes, forms and fillings. Let’s enjoy them all!

How to make the filling

These Edamame Dumplings are probably the easiest veggie dumpling I’ve ever made. In fact, they are probably the easiest dumpling recipe in general because all the ingredients just get dumped into a food processor. Simple as that! You’ll add 2/3 of the thawed edamame along with olive oil, soy sauce, chile flakes, lemon zest and juice, and salt and pepper to the bowl. Puree until smooth. Then add the remaining edamame and pulse until coarsely chopped. This will give you a bit of texture. If you prefer a smooth filling, you can puree all the edamame at once instead of adding in two steps.

What kind of wrappers should I buy?

The most time consuming step for these dumplings is actually not bad since you can use store-bought dumpling wrappers. I prefer to use Shanghai-Style Dumpling Wrappers by Twin Marquis. I find them frozen or refrigerated at both of my nearby Asian markets. They reliably contain 43 wrappers in every 1 pound package, and are a nice large size, and easy to use. Please note that wonton wrappers are NOT the same as dumpling wrappers. They are much thinner, and are best suited for boiling and deep-frying. They will not yield the same texture as dumpling wrappers. You can certainly use the edamame filling to make edamame wontons instead if you prefer, but I would change the cooking method to either poach or deep-fry them.

How to assemble and cook Edamame Dumplings

For these dumplings you will need to lay out 5 dumpling wrappers at a time on your work surface. Cover the rest so they don’t dry out. Wet the rim of each wrapper with water, and add a 1 tablespoon scoop of filling into the center. Fold the wrapper in half and pinch together the edges to seal. I usually pleat my dumplings once I seal them, but this time I made simple half-moons. Instead of sitting them upright I laid them flat on their sides to have a bit more surface area for crisping in the pan. They do take up more room in the pan by doing this, so I had to cook smaller batches, but the overall effect was worth it.

Pan-fried dumplings are cooked with a combination of frying with a small amount of oil, and then steaming to finish. Both of these steps happen easily one after another in the same pan. Heat up some oil in a non-stick skillet and arrange your dumplings to cover the surface. Crisp up the dumplings until the bottoms are golden, then partially cover the pan with a lid. Pour water into the pan, holding the lid carefully so the oil doesn’t splatter. Now cover completely with the lid and allow the dumplings to finish cooking with the steam. When most of the water is gone, remove the lid and re-crisp the dumplings. They are now ready to serve with your dipping sauce.

Edamame Dumplings are incredibly delicious, infused with vibrant freshness from a whole lot of lemon zest and lemon juice. I serve these brightly-flavored edamame dumplings with a toasted sesame-soy dipping sauce. It’s a nice compliment which balances the tartness of the lemon with a salty and nutty accent. These dumplings are crazy easy to make, so there’s no excuse not to try them!

Can I freeze Edamame Dumplings?

You can easily freeze them as well so you can enjoy them whenever the mood strikes. Simply arrange the uncooked dumplings in a single layer on a tray or sheet pan and freeze until firm. Then transfer to a freezer bag. Make sure you label the bag with the date and item inside! If you’re like me and make multiple batches of dumplings, it is easy to forget what fillings are in which.

If you’re nearly as dumpling obsessed as I am, try out a few more of my dumpling recipes. A couple of my favorite veggie dumplings include Three-Mushroom Dumplings and Pan-Fried Vegetable Dumplings. If you want to try a meat filling these Pork and Cabbage Dumplings are an absolute classic combo. And if you’re feeling playful check out these Cheeseburger Dumplings! 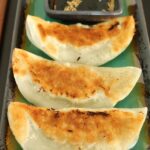 To Cook the Dumplings

To Cook the Dumplings

Recipe adapted from Hey There, Dumpling! *All nutritional information is based on third-party calculations and should be considered estimates. Actual nutritional content will vary with brands used, measuring methods, portion sizes and more.*