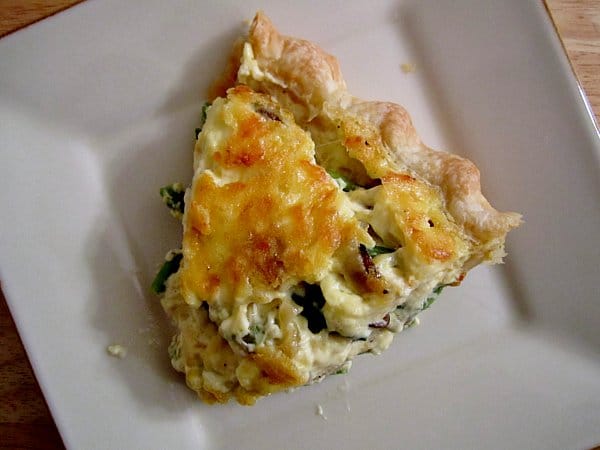 Happy Thanksgiving (a day early)!! For November’s 5 Star Makeover, the theme was a pretty traditional Thanksgiving-inspired one: Green Bean Casserole. I have actually never had a green bean casserole in my entire life. I wasn’t even entirely sure how it was made (other than featuring green beans and crispy onions).

I decided for my variation to make a quiche with the same flavor profile. A quiche is, in it’s own way, a self-contained casserole. A quiche is also something I love and crave regardless of the season or day of the week. I’ve had quiche for dinner on many occasions 🙂 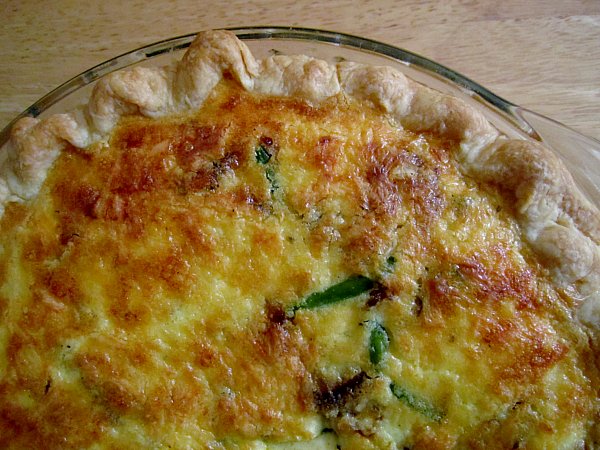 This quiche was deliciously vegetarian. I use frozen haricots verts from Trader Joe’s (it’s a lot cheaper than buying fresh and it’s great quality). I prefer haricots verts to traditional green beans because they are a bit thinner and sweeter. When I made the quiche it didn’t occur to me to cut the beans into even smaller bite-size pieces, but when I cut into the quiche it became very clear that cutting the beans would have been a great idea, so I included that note in the recipe below. 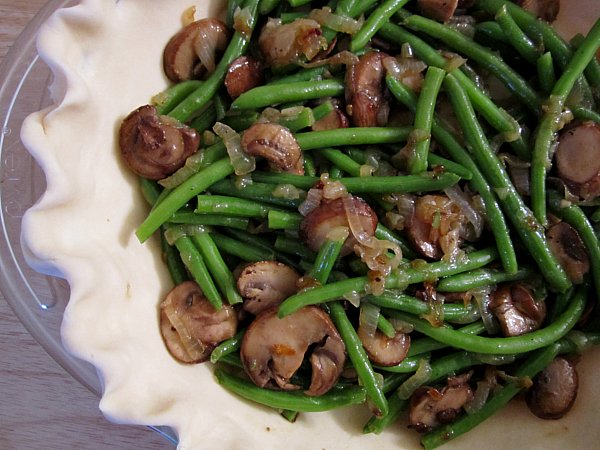 Definitely cut the beans, and also press out as much water as possible to keep your quiche from getting any extra liquid in it. It’s something that happens when making quiche with vegetables especially because they release liquid, but making sure your veggies are cooked and void of excess water is a great start! 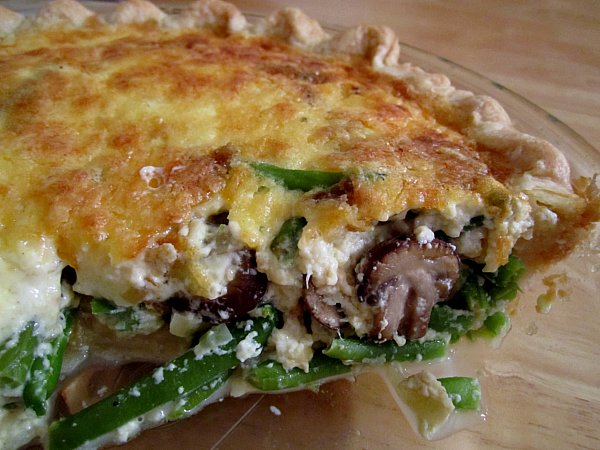 The caramelized onions and sauteed mushrooms add great character to the quiche as well, and of course cheese is practically mandatory. Gouda is a great melting cheese. I had a chunk leftover from making macaroni and cheese and thought it would be the perfect topping for the quiche. Any other melting cheese you have or prefer would be fine too. Cheddar, Monterey Jack and Gruyere would be other great options. 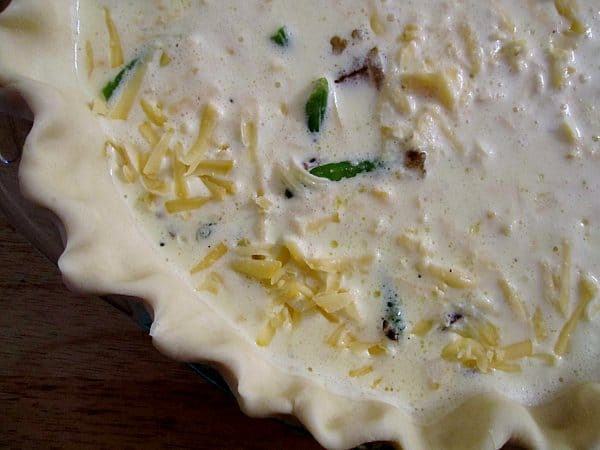 This custard is a fairly soft/loose one. It’s the general ratio I always use for quiche and I’ve never had any complaints. I like it because it has a nice creamy aspect, but if you prefer a stiffer quiche, add another egg. Allowing the quiche to sit and rest before you cut into it or even making it in advance and then reheating it will also make it set a bit better and make for prettier slices. 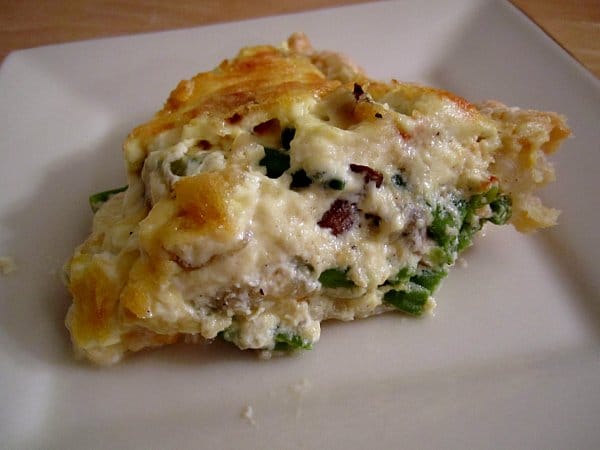 Start by making the crust. In a small bowl add the salt to the water and stir to dissolve. Keep cold in the refrigerator.

In a food processor, put the flour in the work bowl and add the small butter cubes, scattering all over. Pulse briefly until the mixture forms large crumbs and some of the butter is still the size of peas. Add the water-salt mixture and pulse for several seconds until the dough begins to come together in a ball. You should still be able to see some butter chunks.

On a lightly floured surface, shape the dough into a disk 1 inch thick. Wrap well in plastic wrap and chill for at least 2 hours or up to overnight (this dough can now be frozen in a freezer bag and then defrosted in the refrigerator the day before it is to be used).

Place the chilled dough on a floured surface and roll out 1/8 inch thick, lifting and rotating the dough to make sure it doesn’t stick, and working quickly to ensure the dough stays as cold as possible. Add more flour to the board as needed.

Roll the dough circle gently over the rolling pin and then gently unroll the circle over a 9 1/2-inch pie dish, easing it into the bottom and sides, and pressing gently into place. Avoid stretching the dough, as it will shrink back when baking. Trim the dough edges with a sharp knife, if needed, and flute or crimp the edges if you prefer.

Chill the crust 30 minutes to an hour in the fridge before assembling and baking. This ensures the flakiest crust.

Preheat the oven to 375 degrees F.

In a large skillet, heat 2 tablespoons of the olive oil over medium heat and add the onions and a pinch of salt. Saute for a minute to make sure the onions are nicely coated with the oil and then lower the heat and cover. Cook the onions, stirring them every few minutes, until they have softened and caramelized, about 25 to 30 minutes.

In another skillet, add the remaining olive oil and heat over medium-high. Add the mushrooms and cook for about 5 minutes, or until they turn golden and become tender. Season with salt and pepper and set aside.

Meanwhile, bring a pot of water to a boil. Salt the water generously and add the haricots verts. Blanch them for just a couple minutes until they become just tender, but still have a bite. Drain them and immediately shock them in an ice bath to stop the cooking. Drain them again from the ice water and blot them well with paper towels to soak out as much excess water as possible (any extra liquid can make your quiche soggy).

Mix together the haricots verts, caramelized onions, and mushrooms in a bowl. Add this mixture to the chilled pie crust and top with the gouda. In a bowl, whisk together the eggs, heavy cream and milk. Season with salt and pepper. Pour the custard over the filling.

Bake for 45 to 55 minutes, or until slightly puffed and golden brown and no longer jiggles when lightly shaken. A knife inserted into the center should come out clean, although it may look wet.